After I put up my post on Too Faced’s Sweet Peach Eyeshadow Palette (review and swatches here), a lot of you came back to tell me that Sephora Singapore had sold out of everything. I thought I’d hold off until they restocked to put up my review and swatches for the rest of the collection, because I hate reading about something and not being able to go out right away and get it! I walked past Sephora ION this weekend – ok, ok, I went in to buy more makeup – and noticed they had restocked everything, so here goes:

Let’s start with Sweet Peach Glow, which is a face palette that contains a highlighter, blush, and illuminating bronzer. 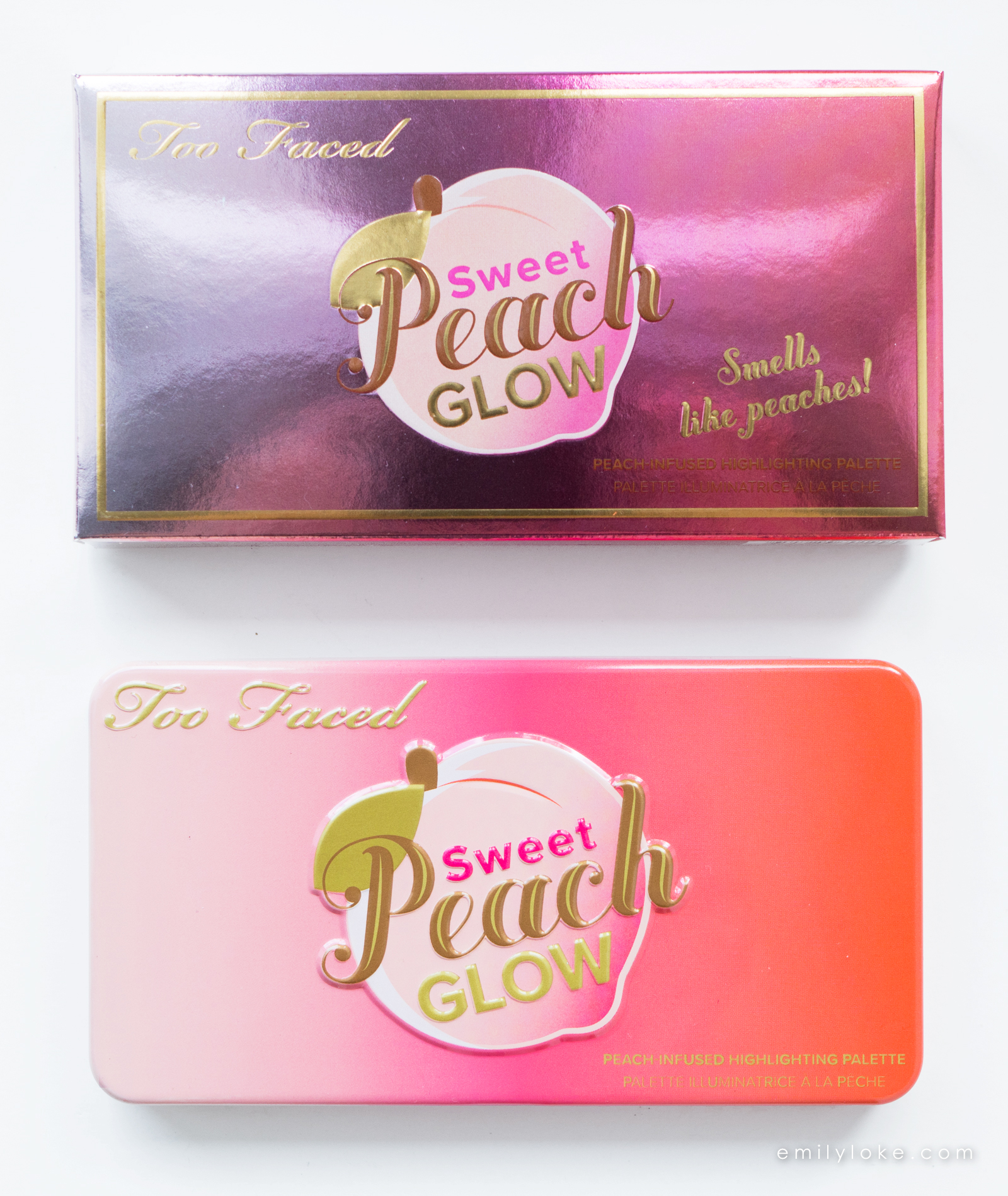 I love the embossing on each of the powders – the highlighter and bronzer have a raised repeating pattern of peaches, and the blush has the same logo that’s on the cover of the palette. 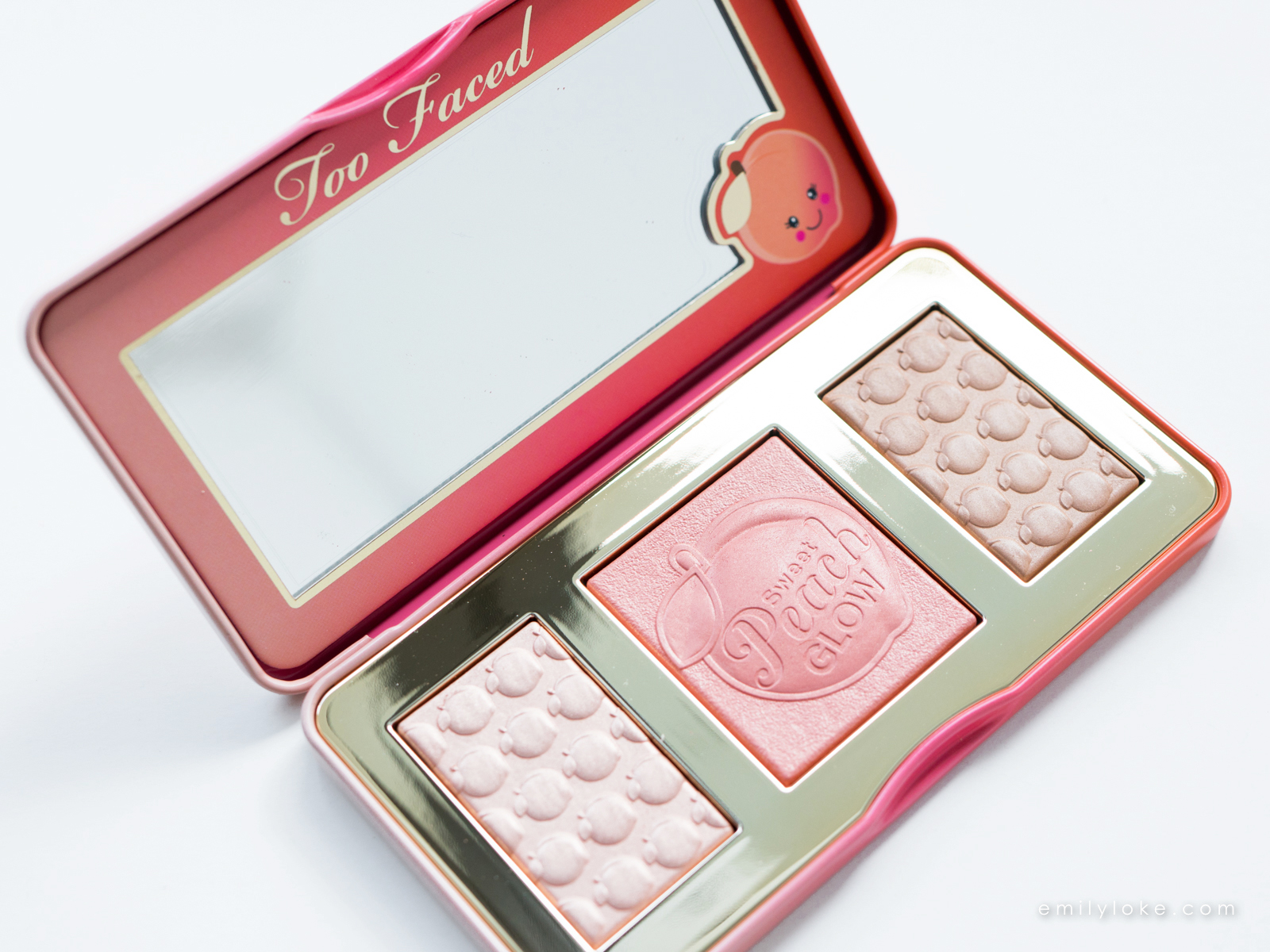 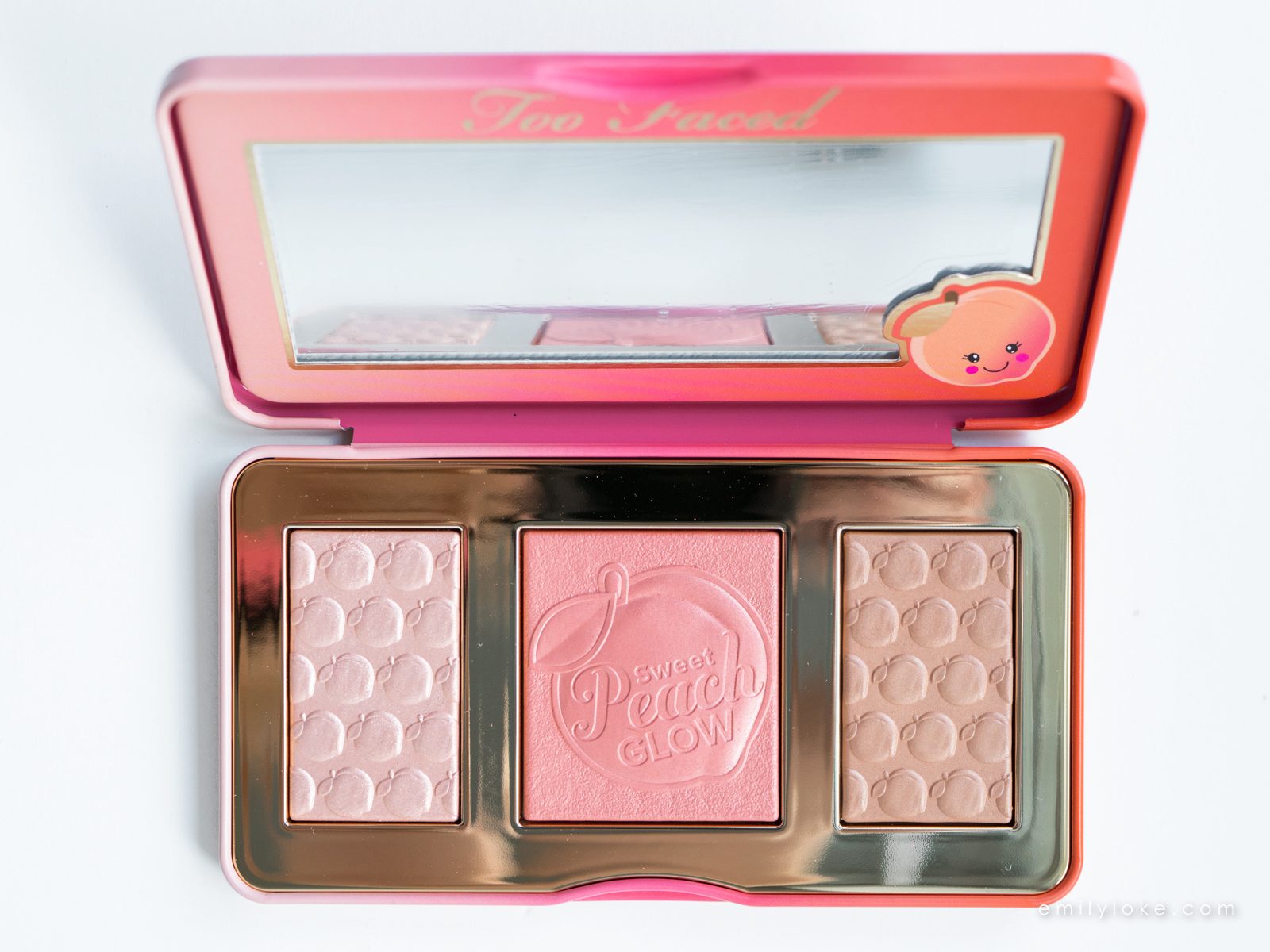 For the record, the powders aren’t hard at all. I’m bringing this up because that’s always my first thought when I see crisply embossed designs – that the product must be quite stiff to hold up to that kind of shaping. But these powders are actually very silky and buttery, so much so that I was pleasantly surprised at the quality. I mean, let’s be real: this collection had enough hype from the eyeshadow palette that Too Faced could totally have phoned it in on everything else if they wanted to make a quick buck. So kudos to them for not taking advantage of this, and putting out solid products!

Here is Sweet Peach Glow swatched next to Papa Don’t Peach, the standalone blush from the same collection. I’ll compare the blushes further on in this post, but if you just focus on the first 3 swatches from Sweet Peach Glow, you’ll see that it’s a very warm, harmonious and bronzy trio that’s really nice on pale skin. 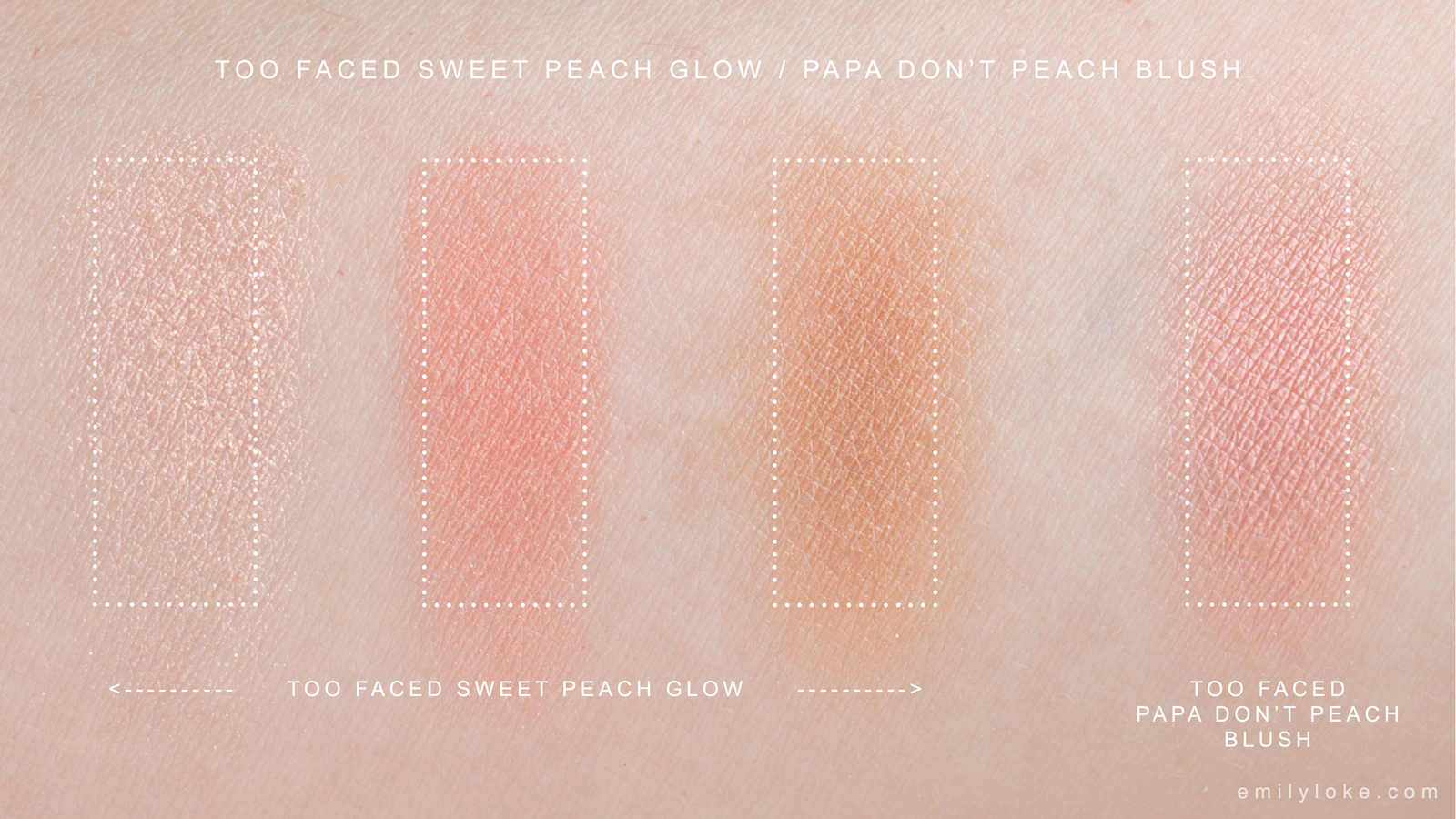 Here’s some quick comparison swatches with similar highlighter and bronzer options. The highlighter doesn’t dupe easily, but I came pretty close with E.L.F Blush Gems (reviewed here) which is very similar to MAC Soft and Gentle so you can probably consider that a fairly decent substitute as well. BECCA Shimmering Skin Perfector in Pressed Opal was a bit warmer and more golden. The Sweet Peach Highlighter actually has a clear base, so even though it looks quite pigmented in the pan it does work on pale skin as well because it’s not going to visibly tint your cheekbones.

I also need to mention how smooth the highlighter was compared to its closest dupe, E.L.F. Blush Gems. The latter is incredibly dry and almost gritty in comparison, which I suppose is to be expected since it’s such a cheap product, but it’s worth mentioning to anyone who has Blush Gems and maybe wants a similar colour with a textural upgrade.

The Sweet Peach Glow bronzer shade is actually a bit rosier than most of the bronzers that I already own. While it’s not pink enough to register as blush-blush, I have used it on my cheeks in lieu of blush and been happy with the brightening results. Because of the sheen it has, this isn’t something you can contour with so I’m pleased that it’s not straight up orange and difficult to pull off on the centre of my face.

Now that you’ve seen the swatch of Too Faced’s Papa Don’t Peach blush, let’s have a look at the adorable packaging: 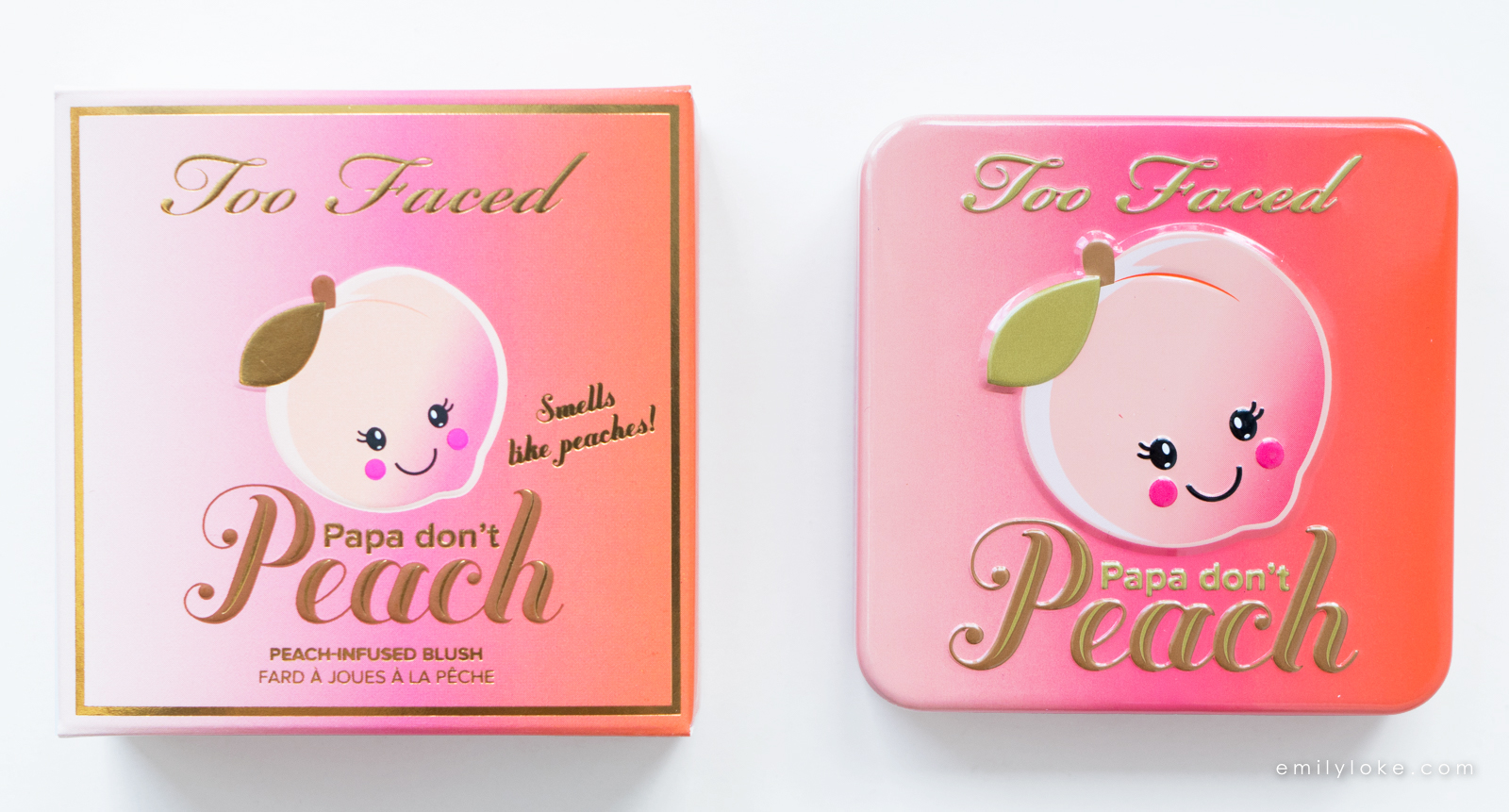 This also has the peach logo from the collection, but in this case the design is recessed rather than raised. The pan is a very generous size, and I love that it comes in its own sturdy tin with a sizeable mirror. This makes it awesome for travel, which as you know is pretty important for me.

Packaging wise, this collection is just so cute. I’m not usually a huge fan of cutesy makeup and tend to gravitate towards sleek luxury packaging, but I genuinely do feel my spirits lift when I see the smiling little peach pal thats on the bottom right of all the mirrors. 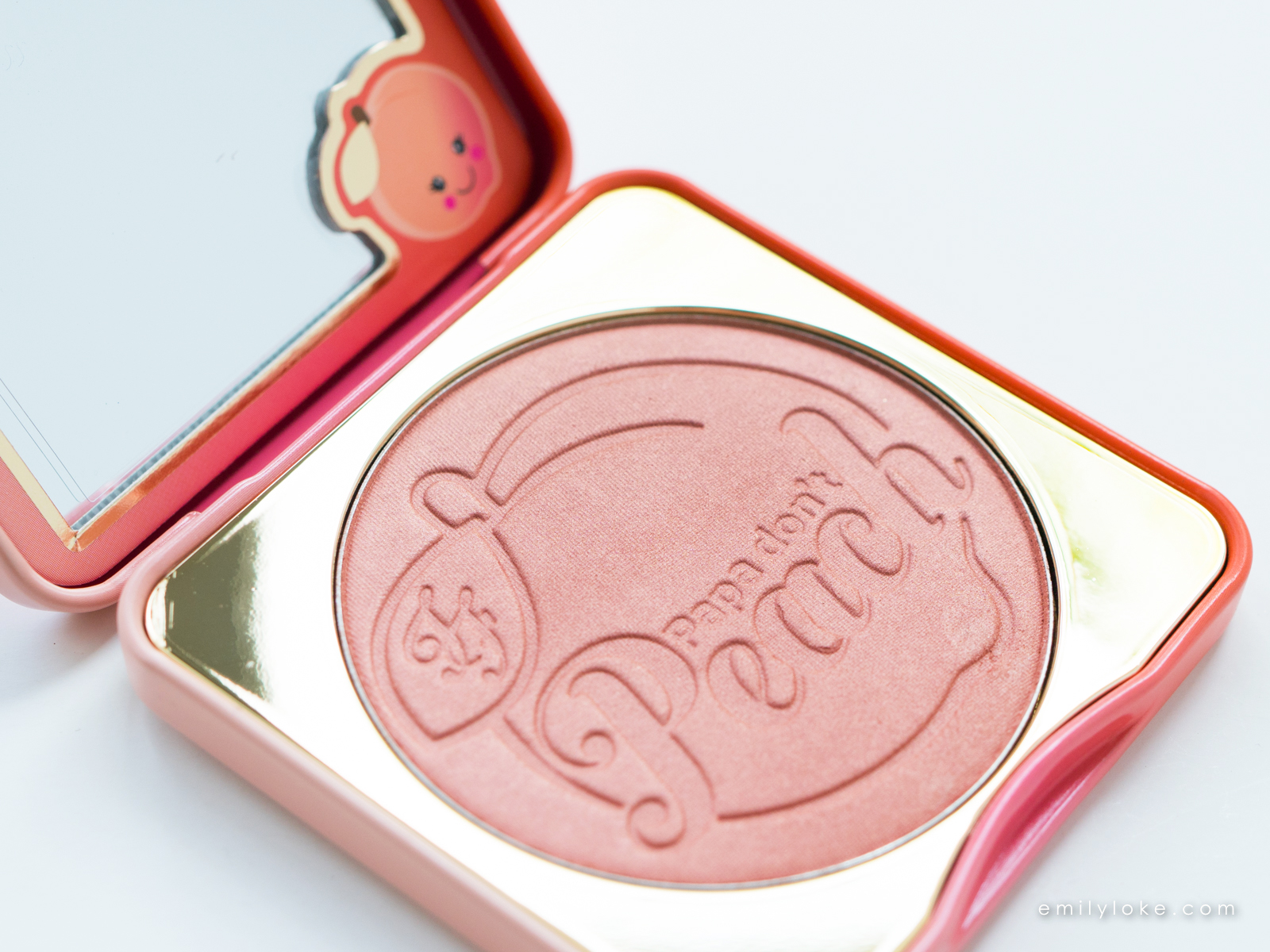 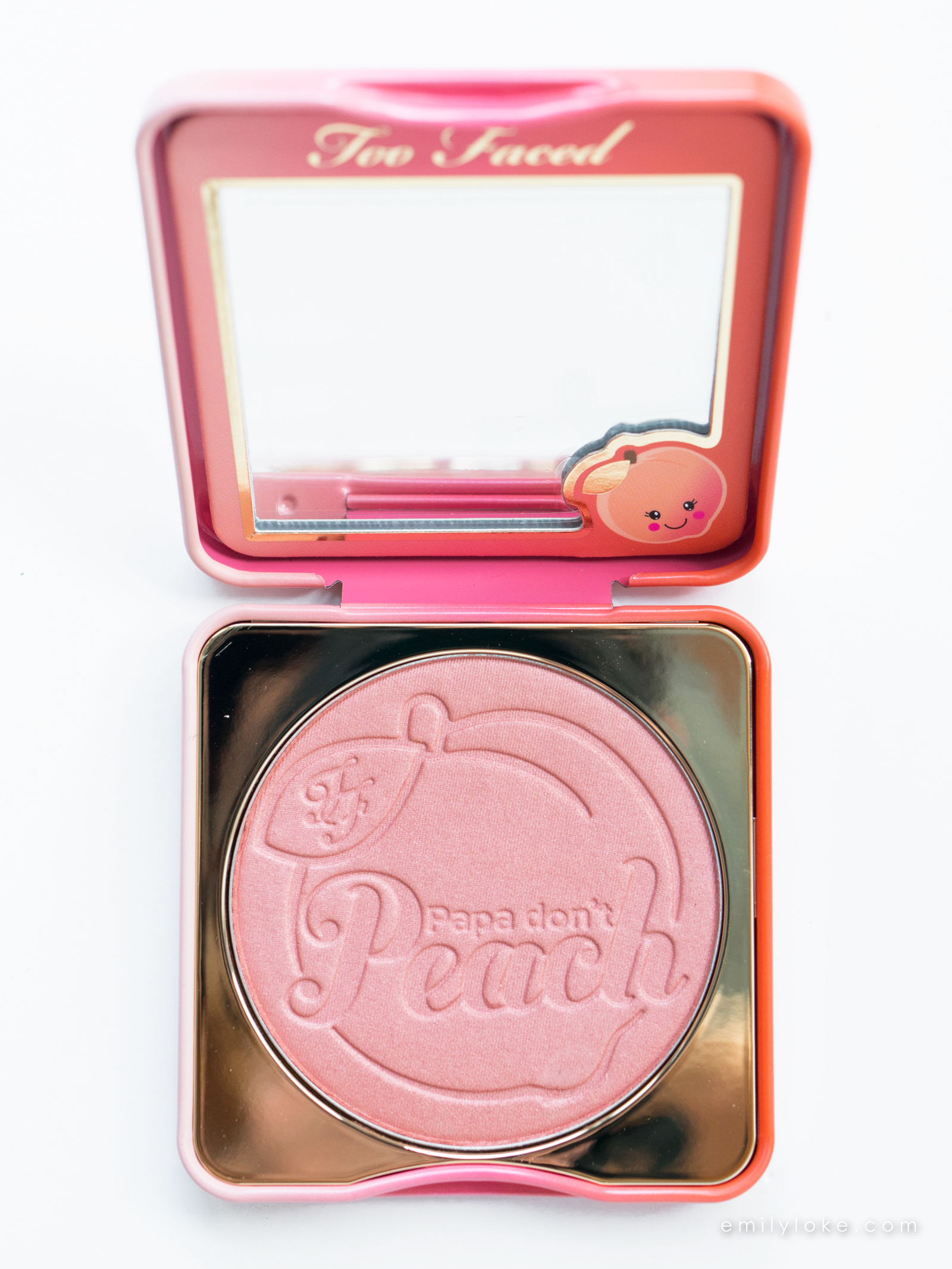 The minute I opened this blush, I was struck at how similar it was to NARS Orgasm. Warm pink base, gold shimmer – Orgasm is just the first thing that comes to mind, really. Imagine my surprise when I swatched this and found them to be quite different! Orgasm turned out to be a heck of a lot cooler and a bit more glittery rather than sheen-y. Who would have thought? 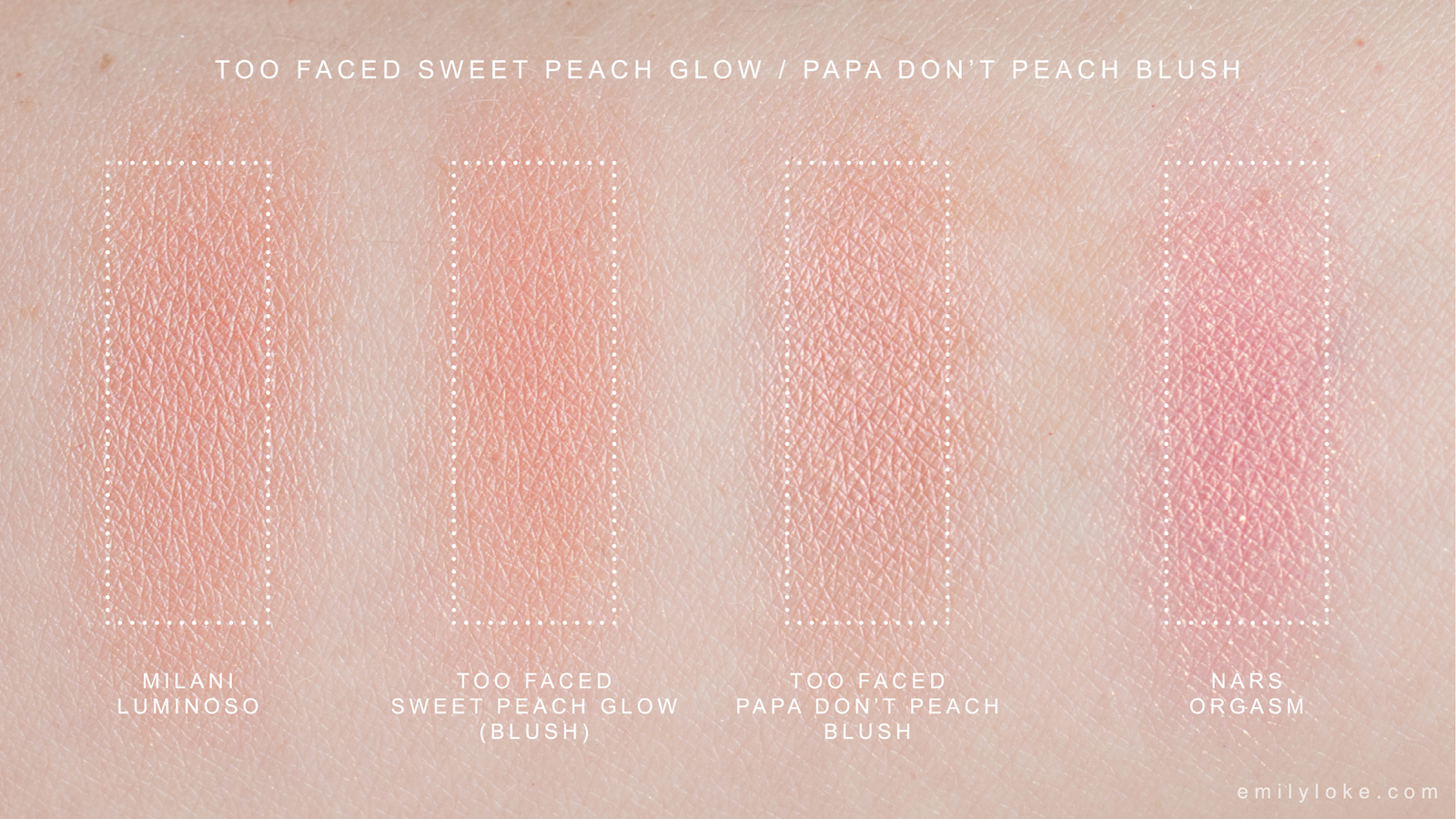 The closest match I had to Sweet Peach Glow’s blush shade turned out to be Milani Luminoso. Sweet Peach Glow was ever so slightly brighter of a coral, and again of a better quality, but if you can’t get a hold of this palette and are obsessed with the blush shade I’d consider it a pretty good dupe.

Comparing the two blushes within the collection, you can see that they are quite different animals entirely. Sweet Peach Glow’s blush is warmer, more satin in finish, and a bright coral. Papa Don’t Peach blush is a tad bit cooler to the point where it’s more of a neutral pink, and has a pink iridescence to it that makes it quite sheen-y. You can certainly justify owning both, but if you are more neutral/cool in your colouring and can’t pull off corals, I’d recommend Papa Don’t Peach.

The blush, I mean. Because guess what? Aside from there already being an eyeshadow colour with the same moniker, there is also a lipgloss in this collection that shares their name. I’ll get to that in a second – meanwhile, here is the full range of Too Faced’s Creamy Peach Oil Lip Glosses: 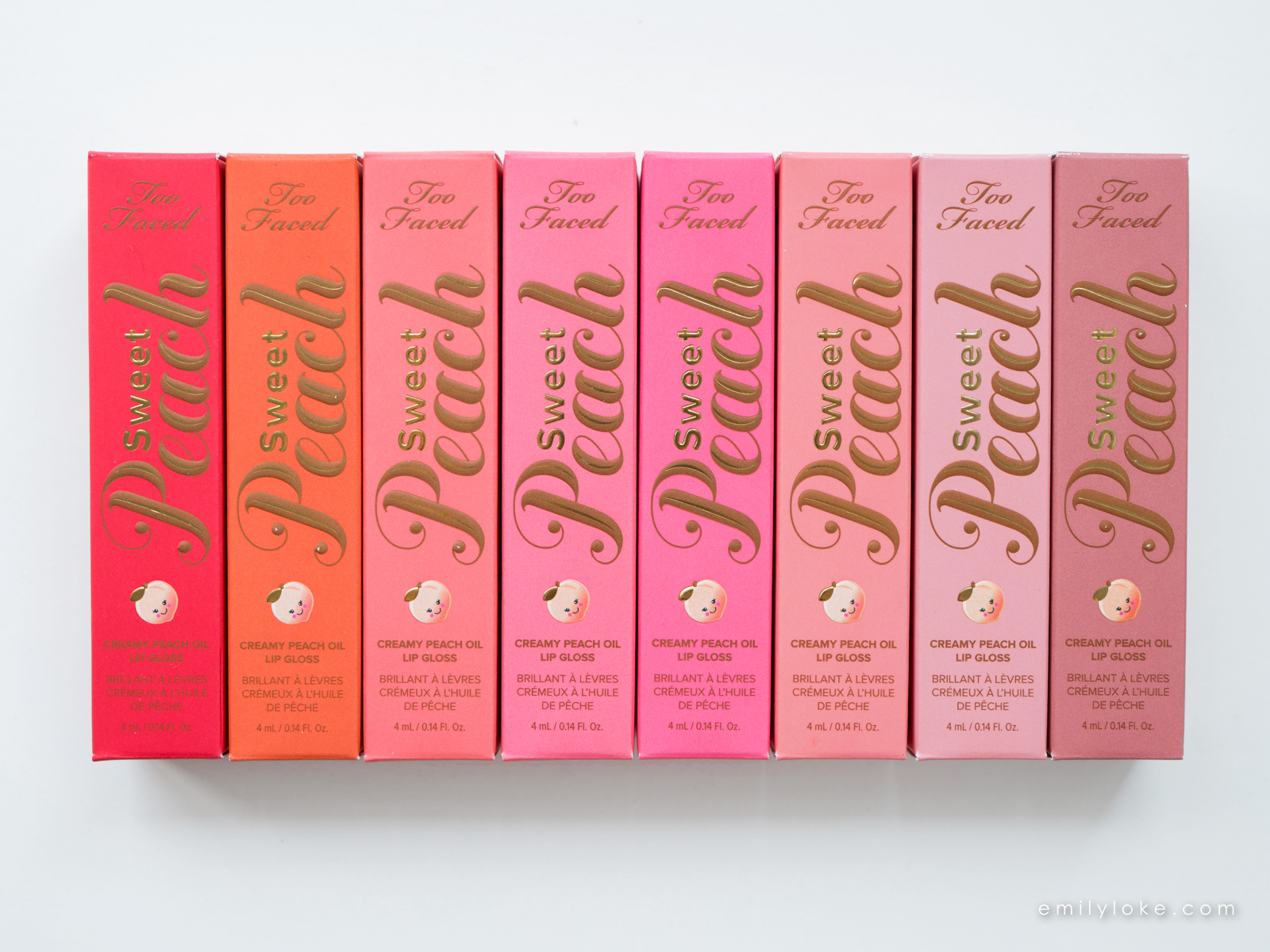 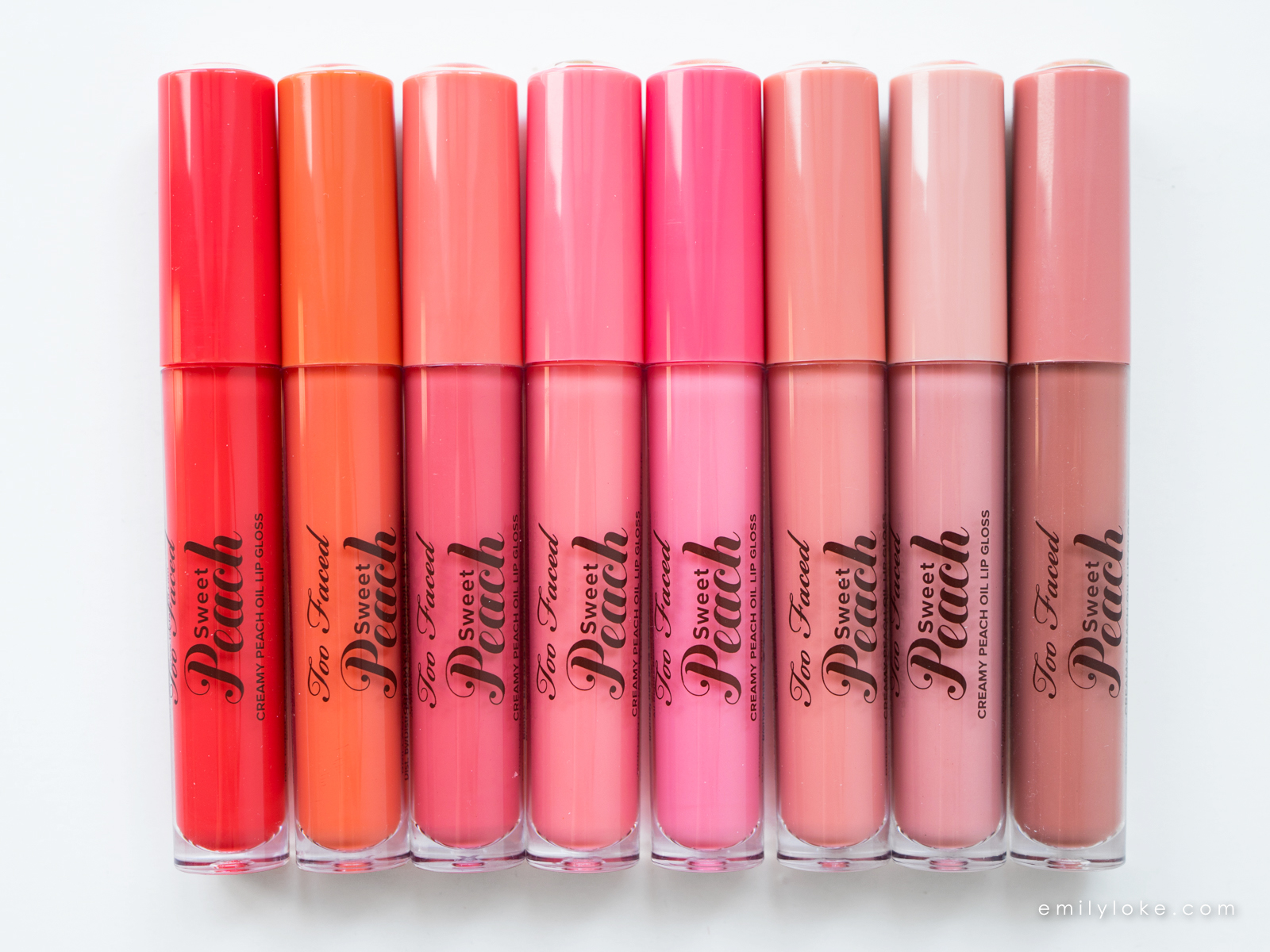 In the same order as the products shots above, here are some swatches of all the glosses:

Papa Don’t Peach – the darkest nude shade in the collection – is actually the colour I’ve worn the most. It’s a gorgeous neutral and although it looks very brown in this photo, is actually kind of a perfect warm nude and just one of those colours you can throw on with any eyeshadow look and know it’ll match.

The formula is pretty nice too. It’s not terribly sticky, and I found them to be quite hydrating and comfortable to wear throughout the day. But whether or not you want these is going to come down to how much you like scented lipgloss. Because the peach scent in these is STRONG. Much, much stronger than in the powder products from the collection, and so strong you can kind of taste a sweet peach flavour when you wear them.

I love peach as a scent and flavour so this doesn’t bother me too much, but the scent wafts up from you lips right into your nose and doesn’t really fade much at all. So if you aren’t a fan scented makeup, I would skip these. However, if you love peaches and like the idea of smelling perfectly edible (to, um…attract boys? I dunno, I’m married, leave me alone) you will appreciate how much longevity the scent has and how actually-like-peach-candy-and-not-gross-chemicals it tastes when some gloss inevitably migrates into your mouth.

I’ll be following up with a FOTD next, but don’t wait on me. If there’s anything that’s caught your eye from this collection I would head down to Sephora ION today because these babies are almost definitely going to sell out again.