You’ll have to excuse the delay in all my holiday posts this year. Ever since most of the collections launched about a month back, Adam and I have been in the process of finalizing the sale of our LA house – no small feat when you’re also simultaneously trying to weed, pack and coordinate an international shipment of all your possessions to a forwarding address you haven’t quiiiiiite locked down yet. It’s fine though, because our stuff will be at sea for a month or so and that should give us plenty of time to look for a new home in a country we have visited maybe three times in total. What could possibly go wrong? (Note to self: maybe start a separate vlog about the things that do go wrong)

Anyway enough about my life, and on to the good stuff!

In the last few years, SUQQU has cleverly been handing the design reigns over to makeup artist Jorge Balzaretti for special collections, and this holiday season is no different. Jorge’s limited edition eyeshadow quads have always been more inspired than the workhorse permanents, but the gap has widened even more since SUQQU’s switch from Blend Colour Eyeshadows to Designing Colour Eyes – the latter are quite uniformly shimmery and many SUQQU fans (myself included) have lamented over the loss of textural and finish variation within each quad.

While SUQQU has yet to factor this feedback into their permanent line, Jorge addressed this in his Summer 2017 collection, much my delight. I was so excited to see distinct matte and glitter shades again! The holiday 2017 collection continues down the same multi-textural path, so anyone who enjoyed the summer collection for the same reasons I did is pretty much guaranteed to love this one as well. 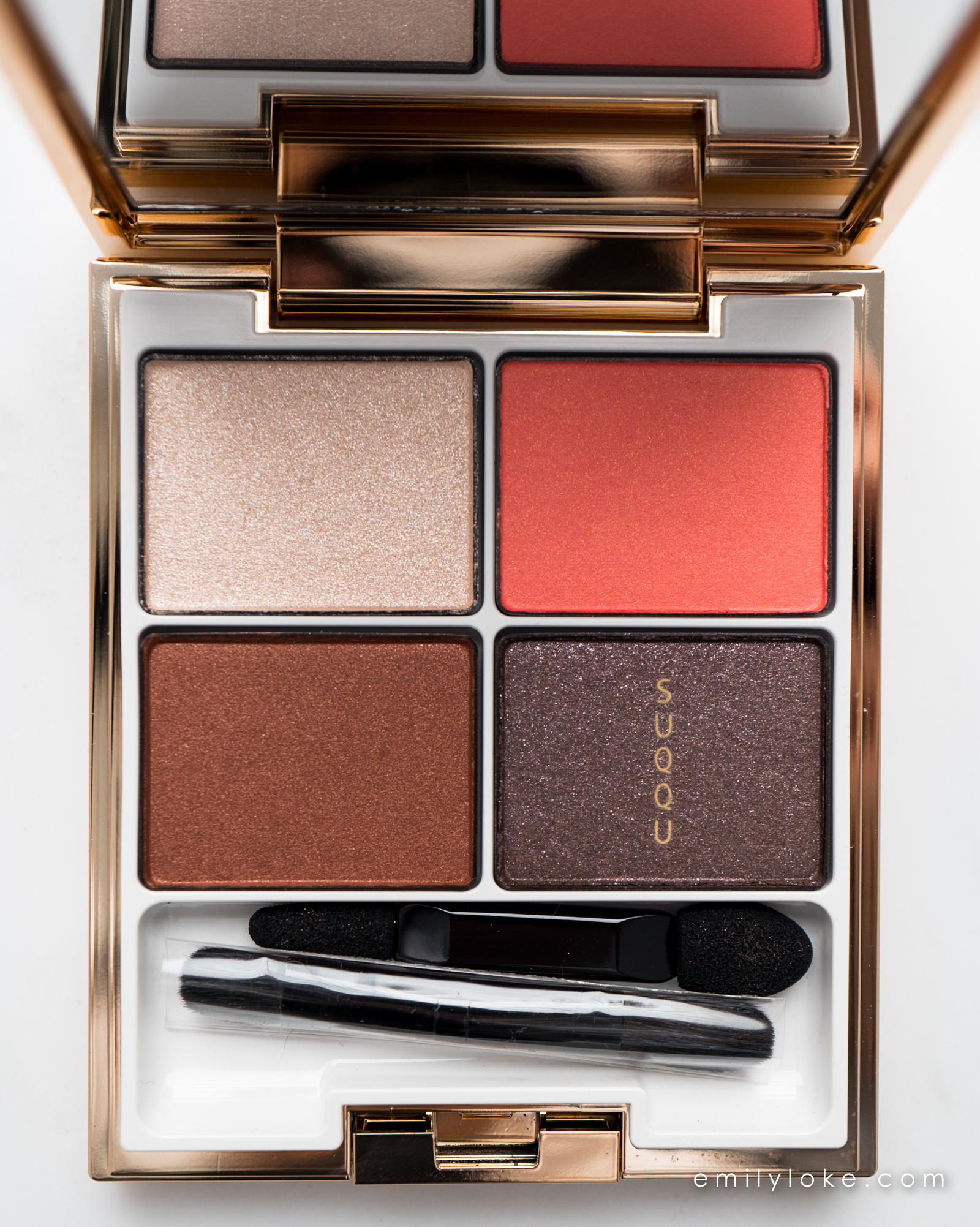 It contains a very pigmented off-white frost, a satin peach, a shimmery rich copper and a very interesting slightly-purplish brown. I’d describe it as a satin-matte in base with multi-coloured sparkles mixed in. 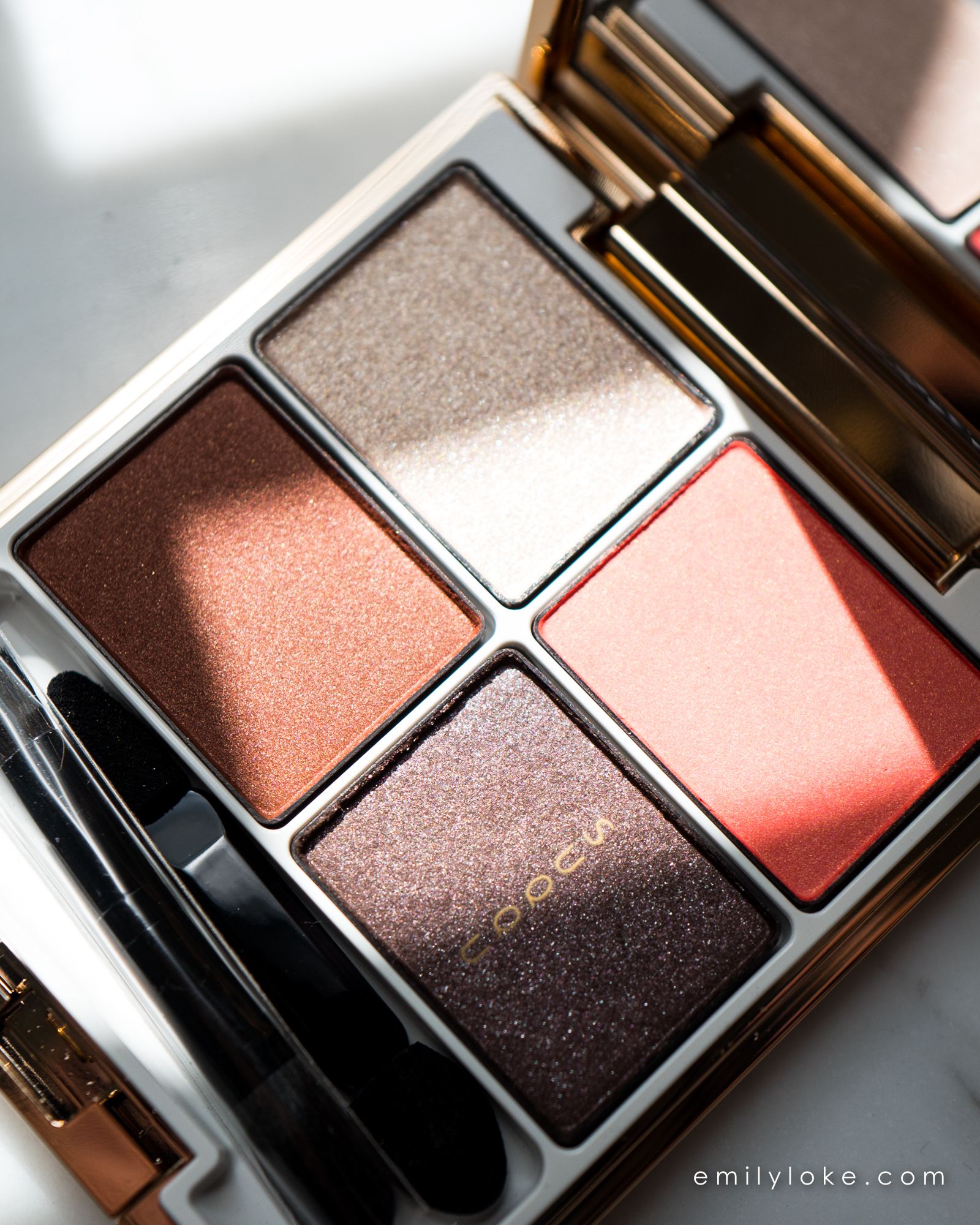 Of the two quads I received to test, this is my favourite. I wasn’t expecting it to be, because as much as I like warm orange shades, peach itself has never been a go-to colour for me. I suppose it’s because it’s so close to the actual colour of my skin when I’ve rubbed it raw or something; I’ve never thought it looked great around my eyes. Turns out, I just hadn’t met the right peach yet!

Or perhaps I hadn’t met the right peach in the right context. Take a look at how beautifully it combines with the other shades in this palette to create a rosy-taupe-brown and a dusty rose. It helps that all the shades in this quad are very pigmented and punchy – with very little effort on my part, I ended up with a flattering halo eye rather than the pale wash of shimmery peach I’d initially feared would be the result.

Next up, SUQQU Designing Colour Eyes in 110 Kohakuyoi: 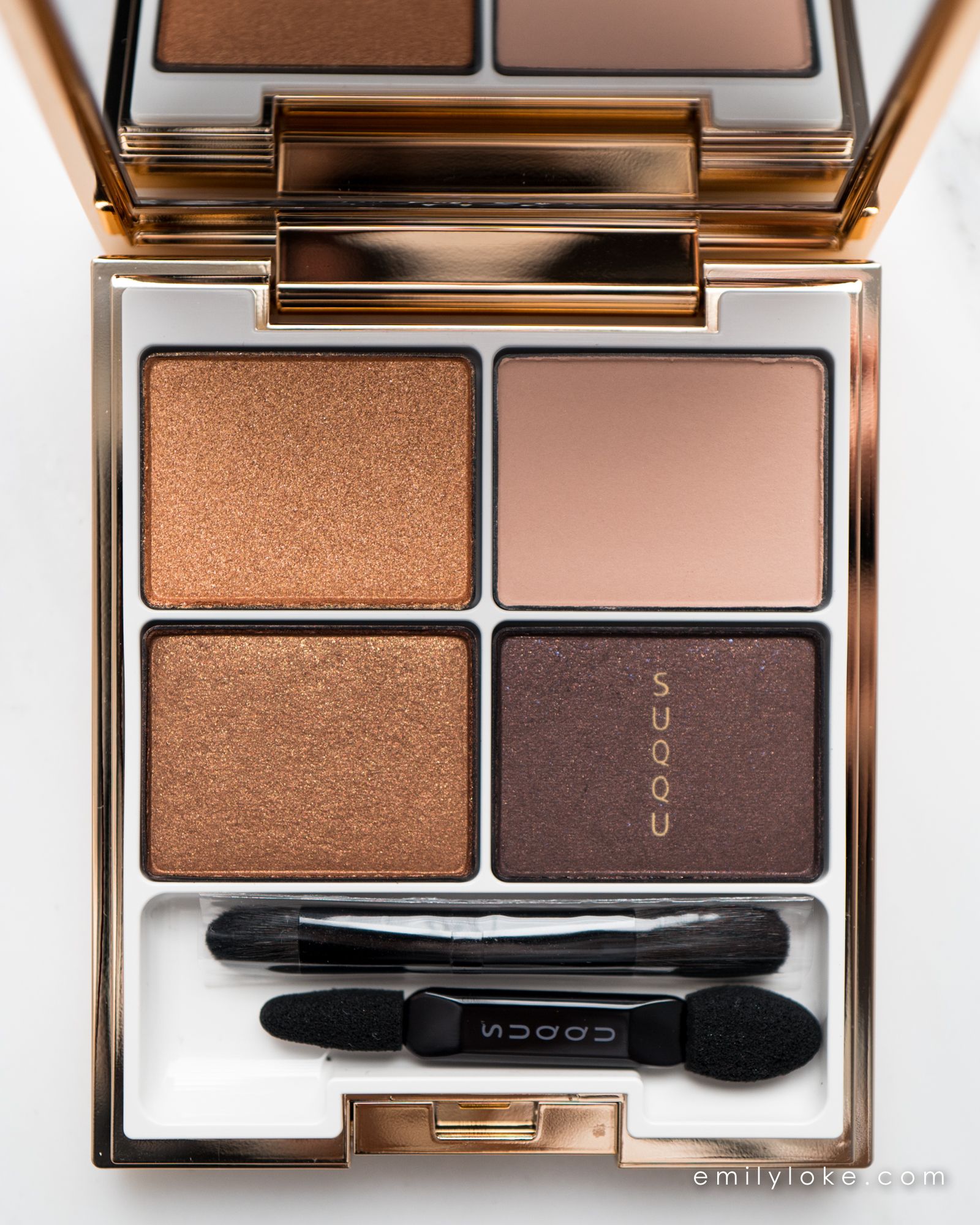 Is anyone else getting Matsukasa vibes here?

When I first opened this up, I was so glad to finally see a basic warm brown quad since even the permanent line lacks one. And then I swatched it and realized this quad was anything but basic. In fact, it was a puzzle at first because in the pan, the two shades in the left column look pretty similar and I couldn’t for the life of me figure out how to use it.

But let’s just have another look at the beautiful shimmers in the sunlight before I go on about my Kohakuyoi revelation. 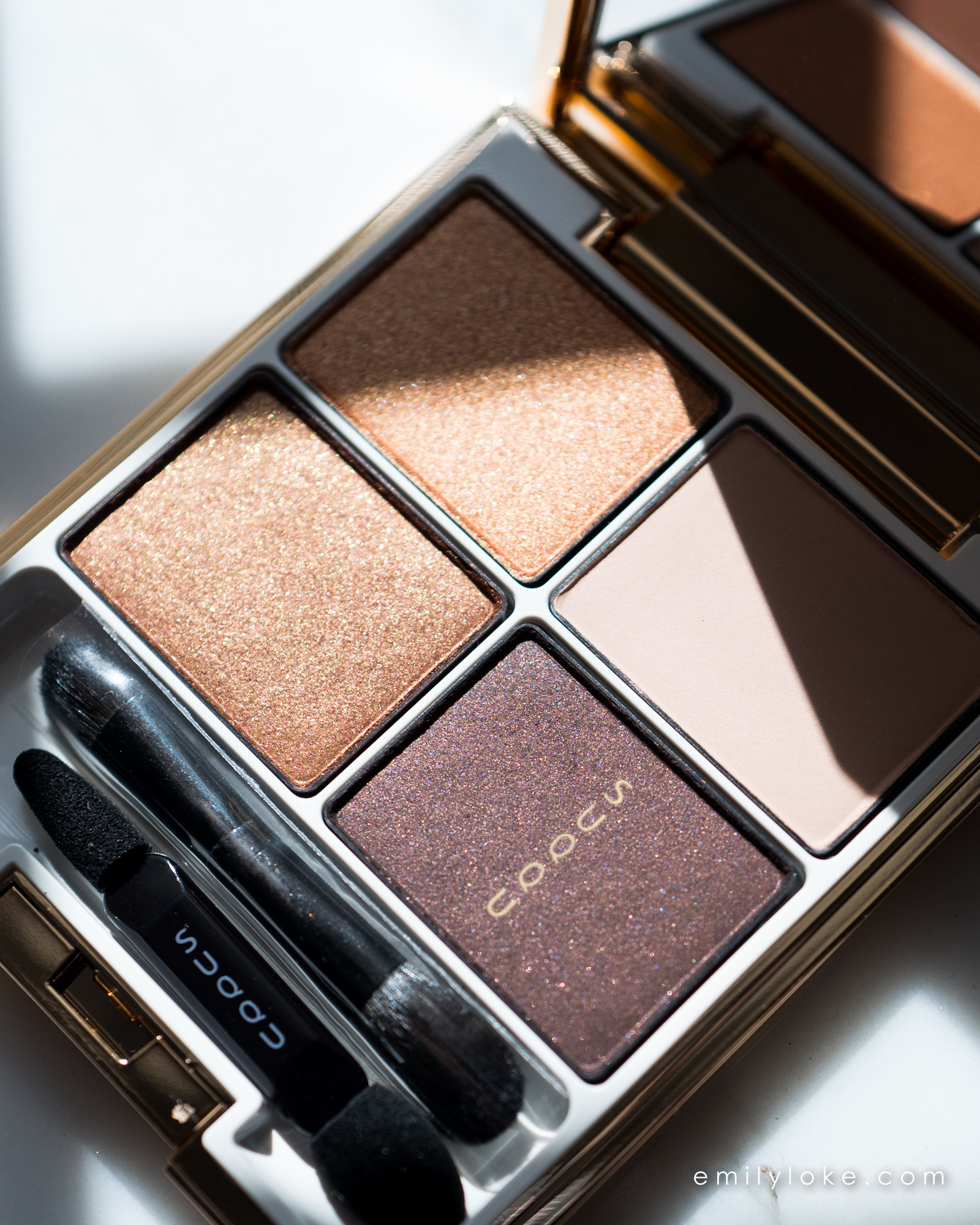 It baffled me even as I swatched it. The first shade was just…sheer glitter? Um, what now?

The three other shades made sense to me: a matte nude shade for a base layer and blending work, a copper brown with gold sparkles, and a cool dark brown with multi-coloured glitter flecks. None of them wowed me on their own until I thought to mix them, and then BAM.

Even in swatches, it’s easy to see that this was made for layering a la old-school SUQQU quads. The two darker shades combined perfectly into rich metallics without muddying, and that sheer glitter that initially stumped me? Well, it adhered itself like a magnet to the base shades and just brought them to life in the most holiday-appropriate way. How a sheer powder glitter can stick to a regular powder base that well is beyond me, but I’ll chalk it up to SUQQU magic. Like I said, not so basic at all. 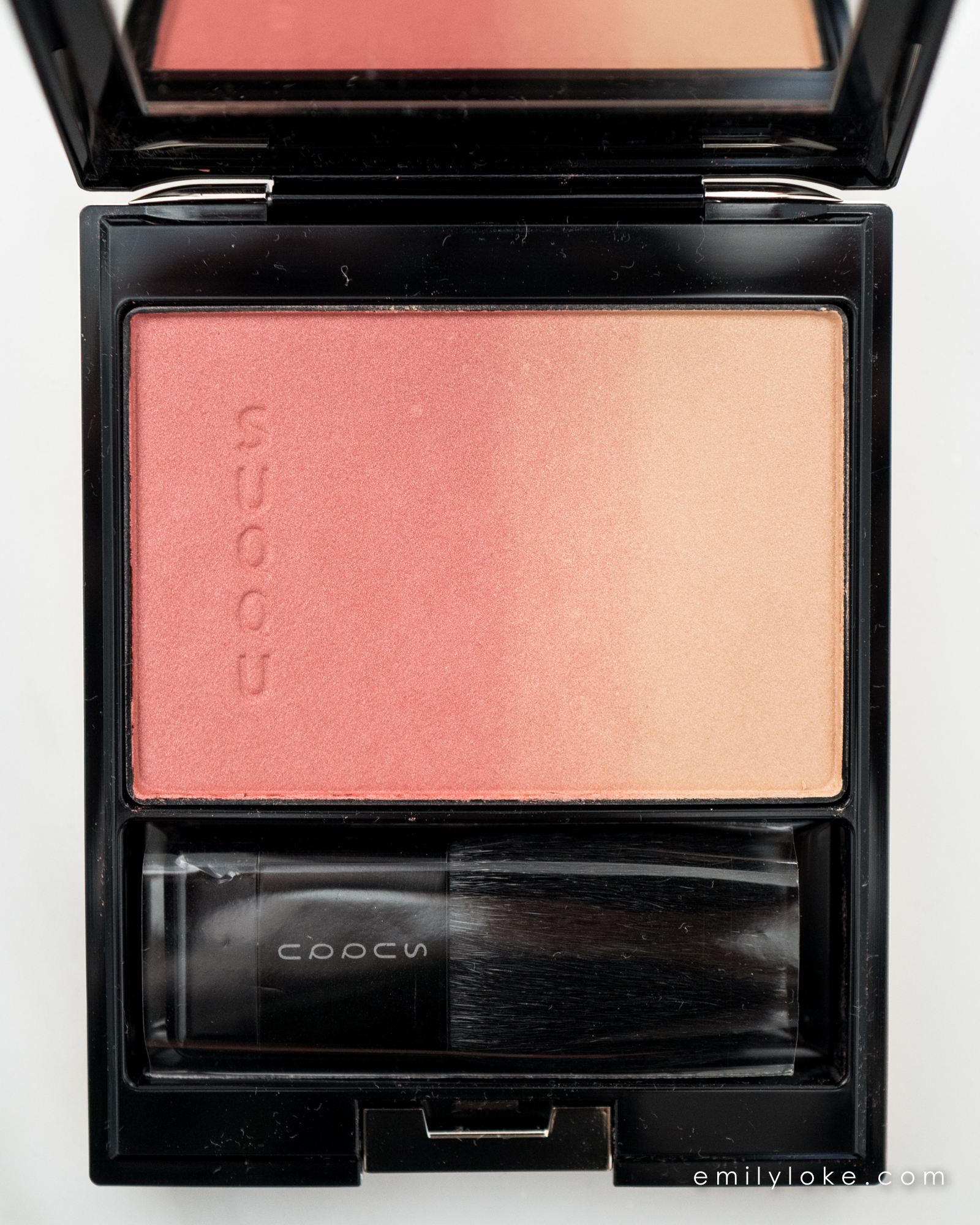 It’s a warm pink that fades into a nude gold, and surprise! Appears completely transformed in the light.

Look at that beautiful shimmer finish. I admit to being daunted by it initially, because shimmery blush isn’t always the kindest to skin texture, but I was silly to have worried. SUQQU is not the kind of brand to make unflattering blush! What was I thinking? 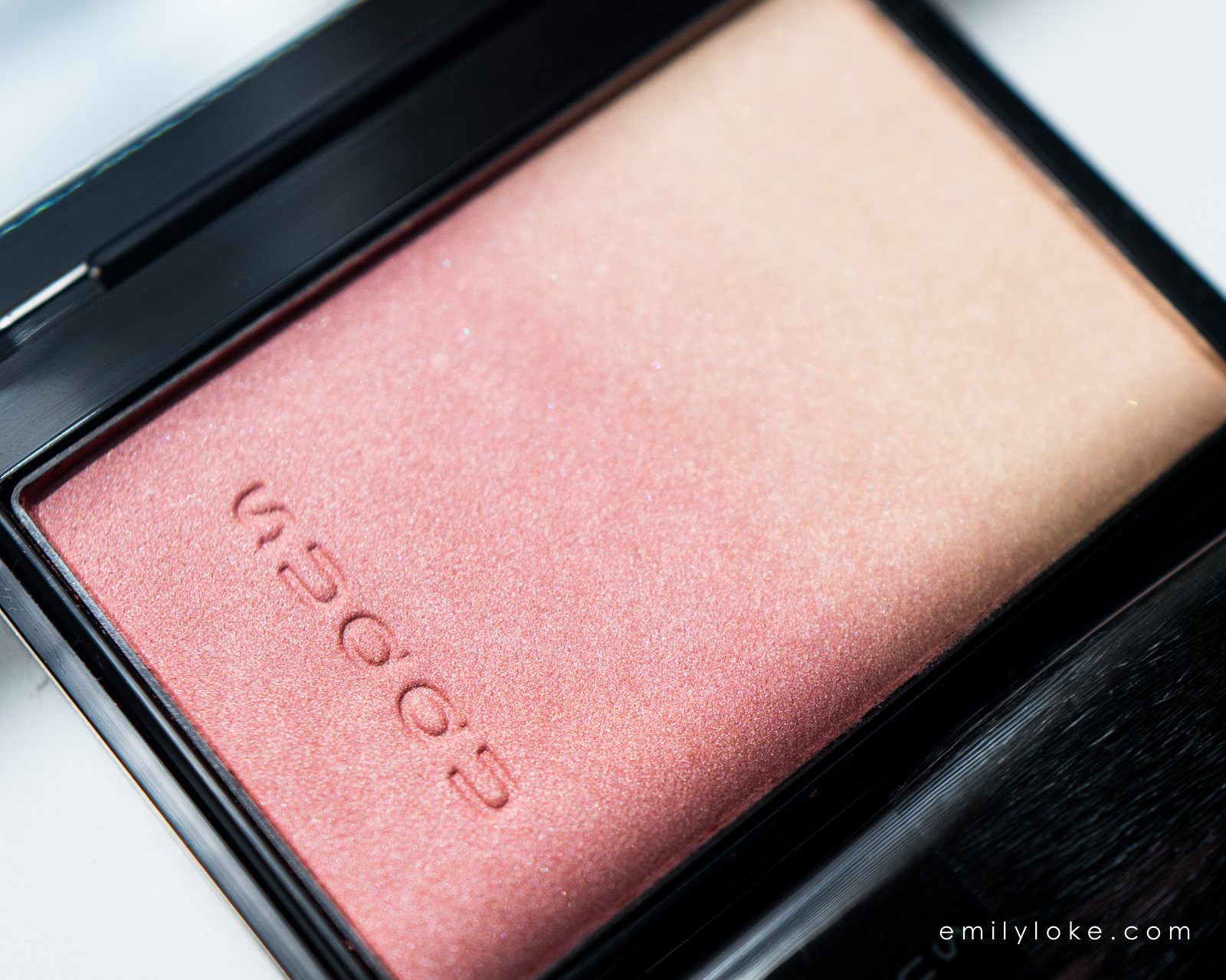 Sure enough, the swatches proved that the formula was silken and the shimmer perfectly refined. I have long loved Hourglass Ambient Light Blushes for their flattering, subtly illuminating glow that other products have so far fallen short of emulating. This blush, however, does all the things Hourglass ones do and more: it lets you control the amount of sheen you get by deciding how you want to mix the hues.

The pink on its own has a fair bit of reflect to it, but you can really amp it up by mixing it with the gold highlight shade. Not to the point of shine, but a solid, healthy glow. Here are some swatches in the shade and sunlight, so you can see the extent of the shimmer. As you can see, the mixed shade, when it catches the light, has got a gorgeous warm opalescence to it. 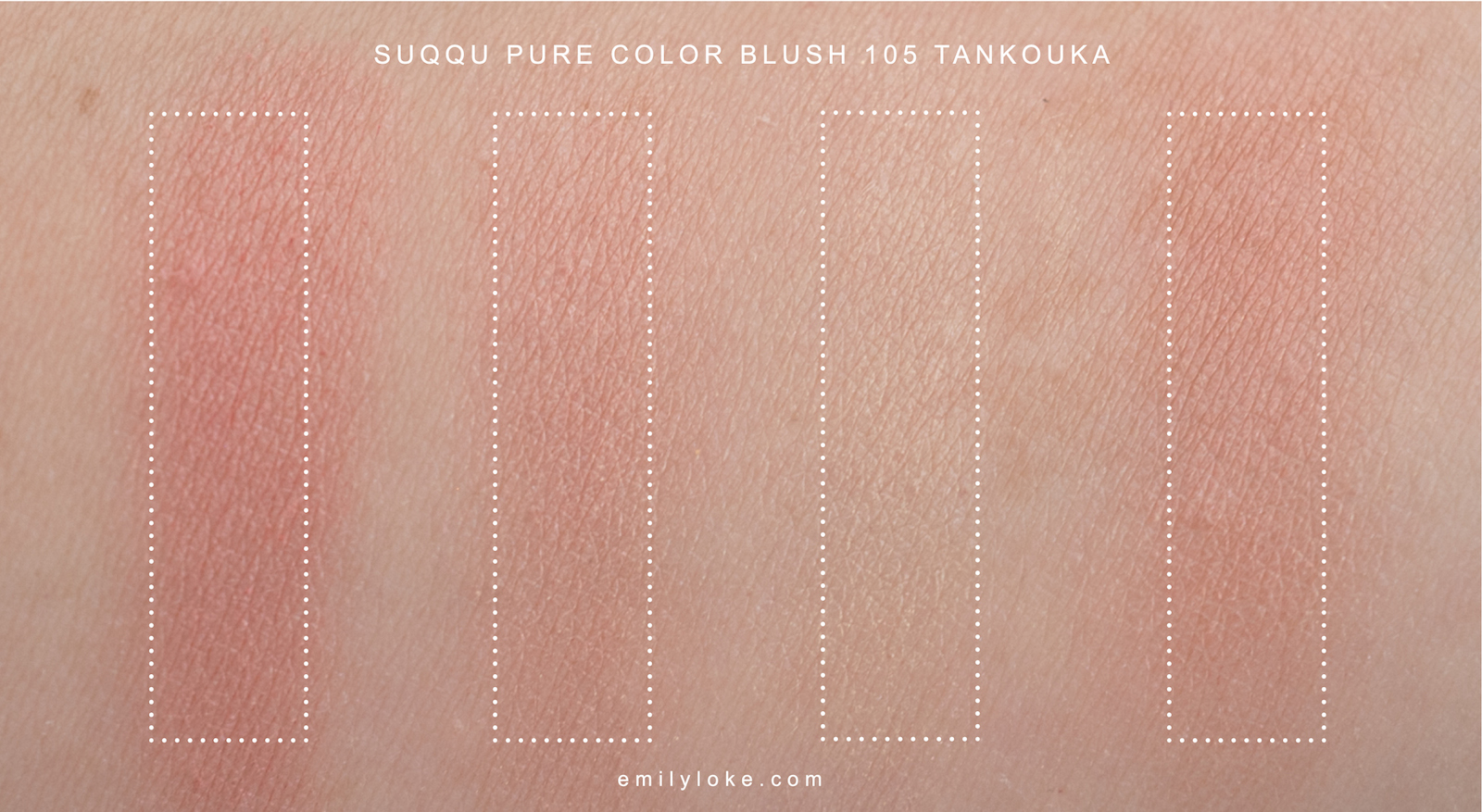 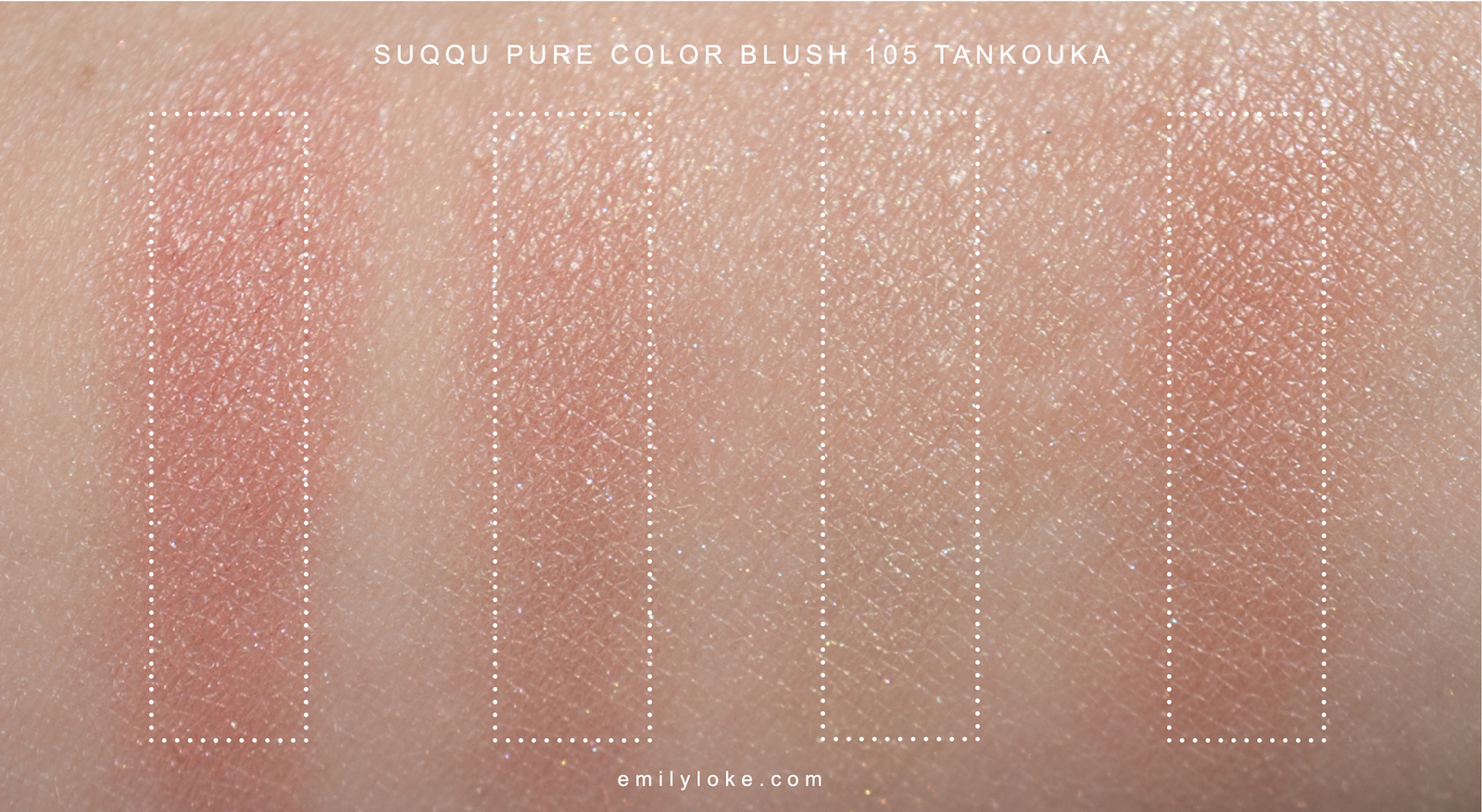 Last but not least, the jewel of this year’s collection – SUQQU Extra Glow Lipstick 107 Yoibudou:

SUQQU rarely does vamp shades, so this year’s release of not one or two but THREE dark shades is quite something! 106, 107 and 108 are red, purple and brown-based respectively. As per the “glow” part of their name, the formula of these lipsticks are sheer and glossy. They’re also pigmented while being quite slippery, so it’s a credit to the brand that they don’t streak or go on patchy, or at least that was my experience with 107 Yoibudou. Personally I’d recommend using a lip-liner with these shades if you’re planning on wearing them at full application strength since you might see a bit of edge bleed due to their wetness. 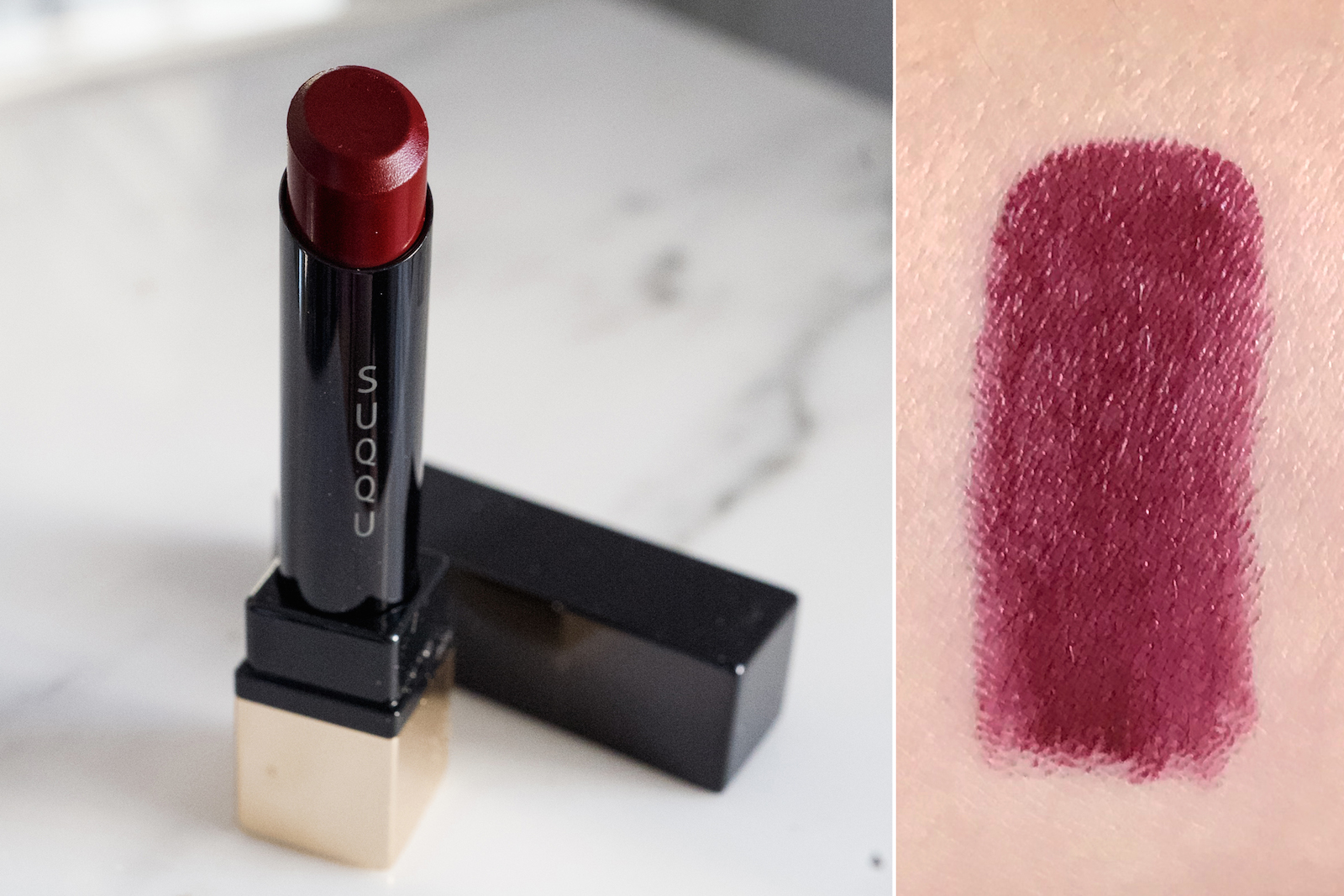 Note: at the time of this posting, some of these beauties were still available on Harrods’ site, but I fear they are fast disappearing. For international orders, you could try enquiring suqquuk@eqpuk.com or if you’re in the UK, heading down to a SUQQU counter in person since the physical stores usually seem to have more stock on hand.