Despite my best efforts, I can’t quite figure out the proper English translation for SUQQU Ex-32 Rengazome (煉瓦染). My feeble attempt at reading the Chinese characters yielded something about the refined colour of brick tiles, but I’m almost certainly way off the mark. So let’s pretend instead that Rengazome means “Red Eyeshadow for People Who Don’t Wear Red Eyeshadow”. Because it should, and I’ll tell you why in a minute. 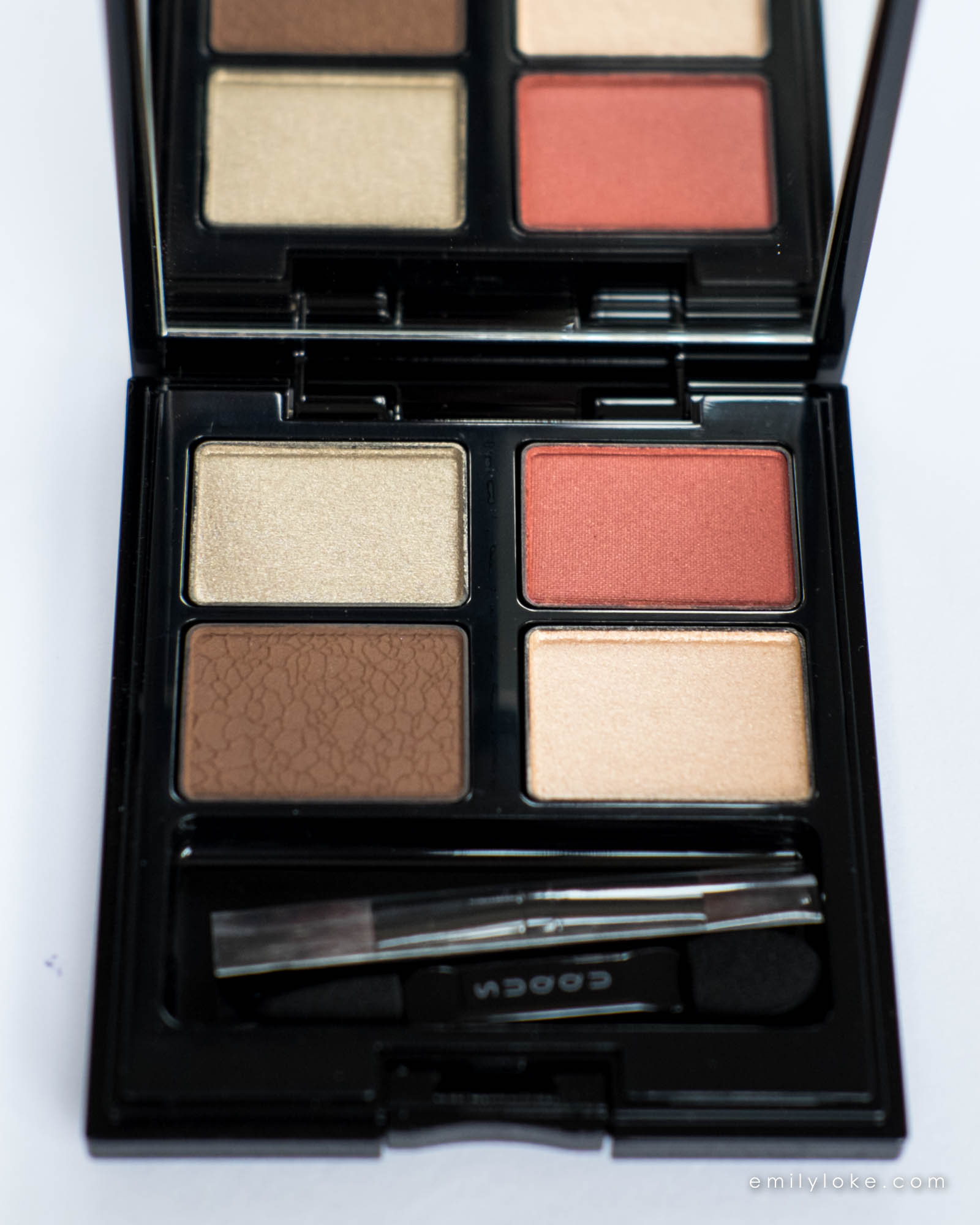 Isn’t it beautiful? Here it is in direct sunlight. Look at that magical top left shade! 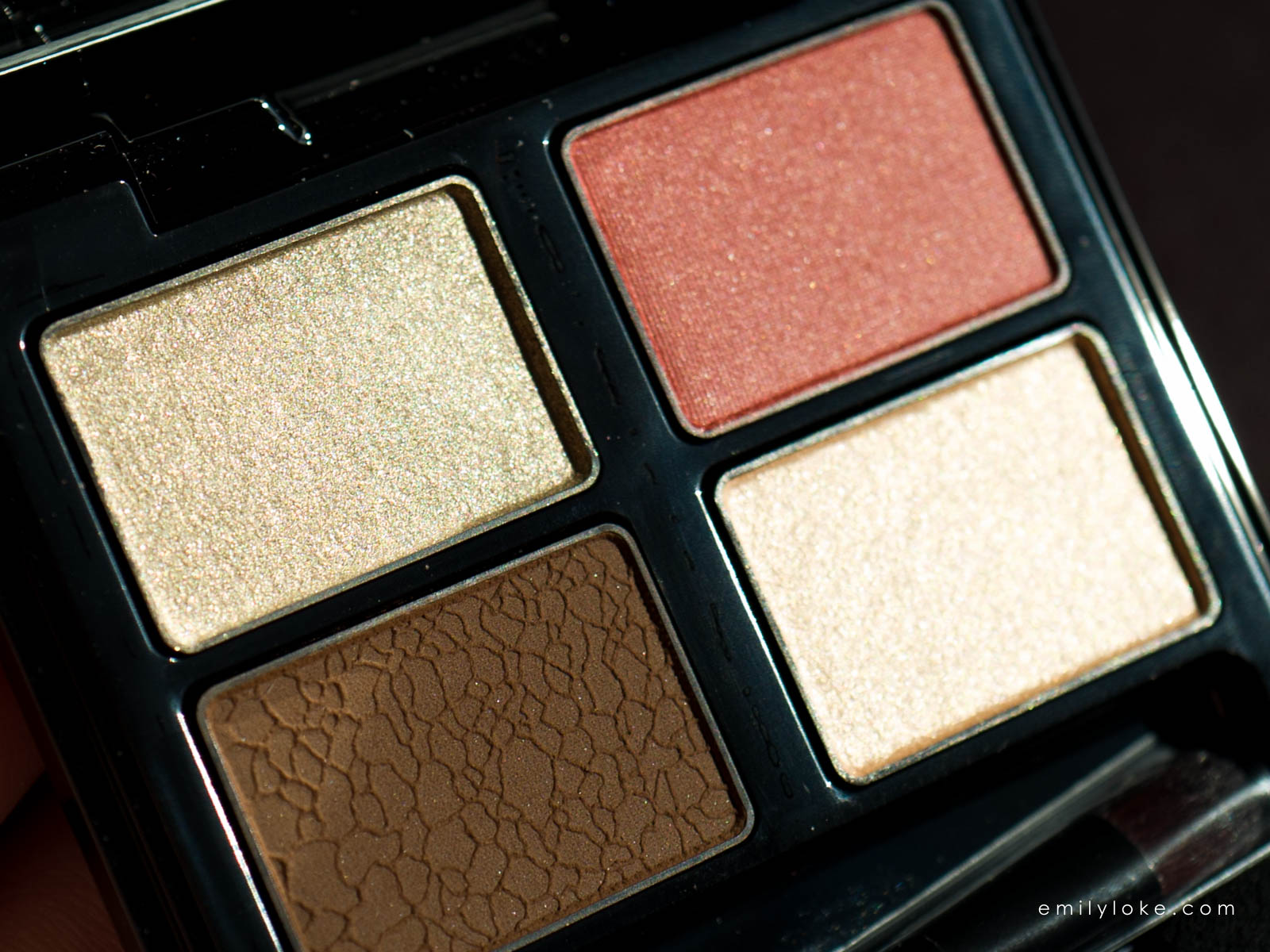 As can see, the matte brown shade is embossed with a very interesting crackle texture. Super random thought: it kind of reminds me of the way a honeydew melon’s skin looks. The embossing on the brown shadow is echoed in a bar of texture on the front of the case – an unexpected touch considering SUQQU’s other recent limited edition palettes have had plain black cases. 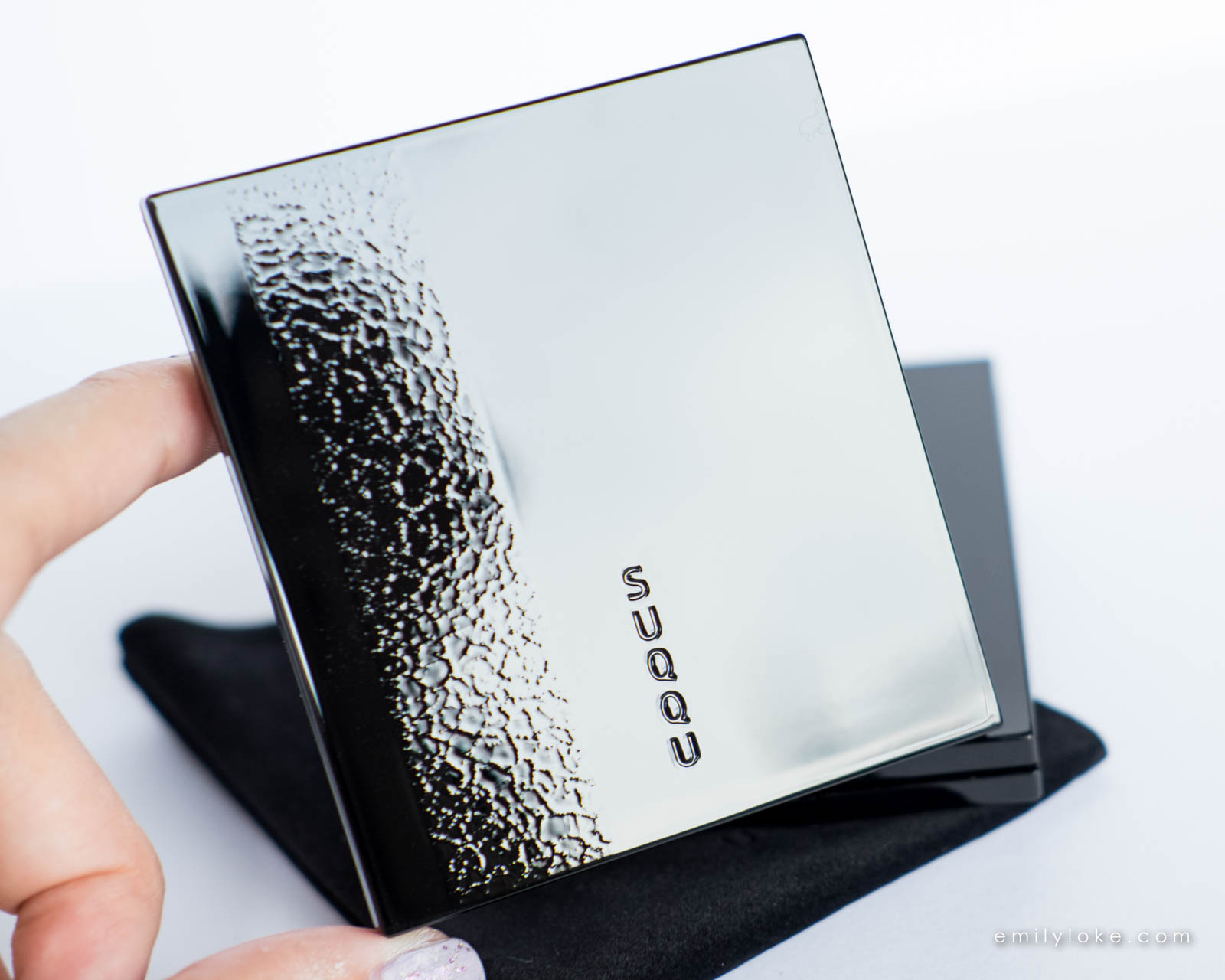 Amidst the current tide of red eyeshadows, I feel Rengazome really stands out as being the easiest and most forgiving way to test the waters. The satin-finish red shade is muted, and by being presented with more conventional (dare I say safer?) neutrals I find it has very approachable quality. If you’ve never worn red eyeshadow and want to give it a try but are privately put off by the OTT-ness of what you’ve seen thus far, Rengazome is the way to go. 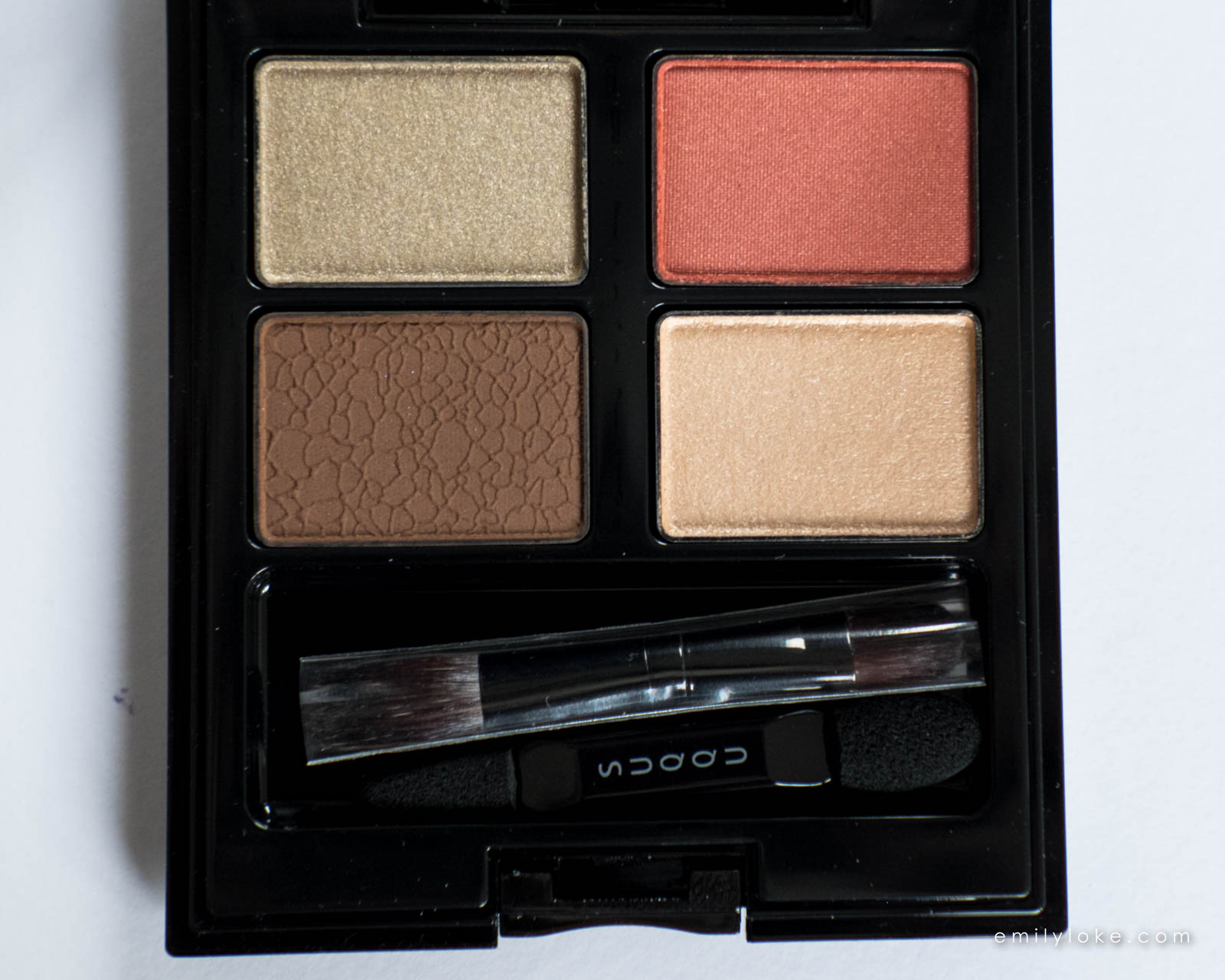 Aside from said red, SUQQU Ex-32 Rengazome comprises of a light golden-olive with multidimensional shimmer, a matte medium neutral brown, and a frosty champagne shade that actually blows most of my highlighters out of the water. No kidding. If SUQQU ever decided to make a large pan of this and market it as a highlighter…Becca better watch their back!

For many people, I’m sure the golden-olive will be the most intriguing shade in this quad as it has that trademark complex shimmer SUQQU is known for, with a surprisingly rich pigmentation. 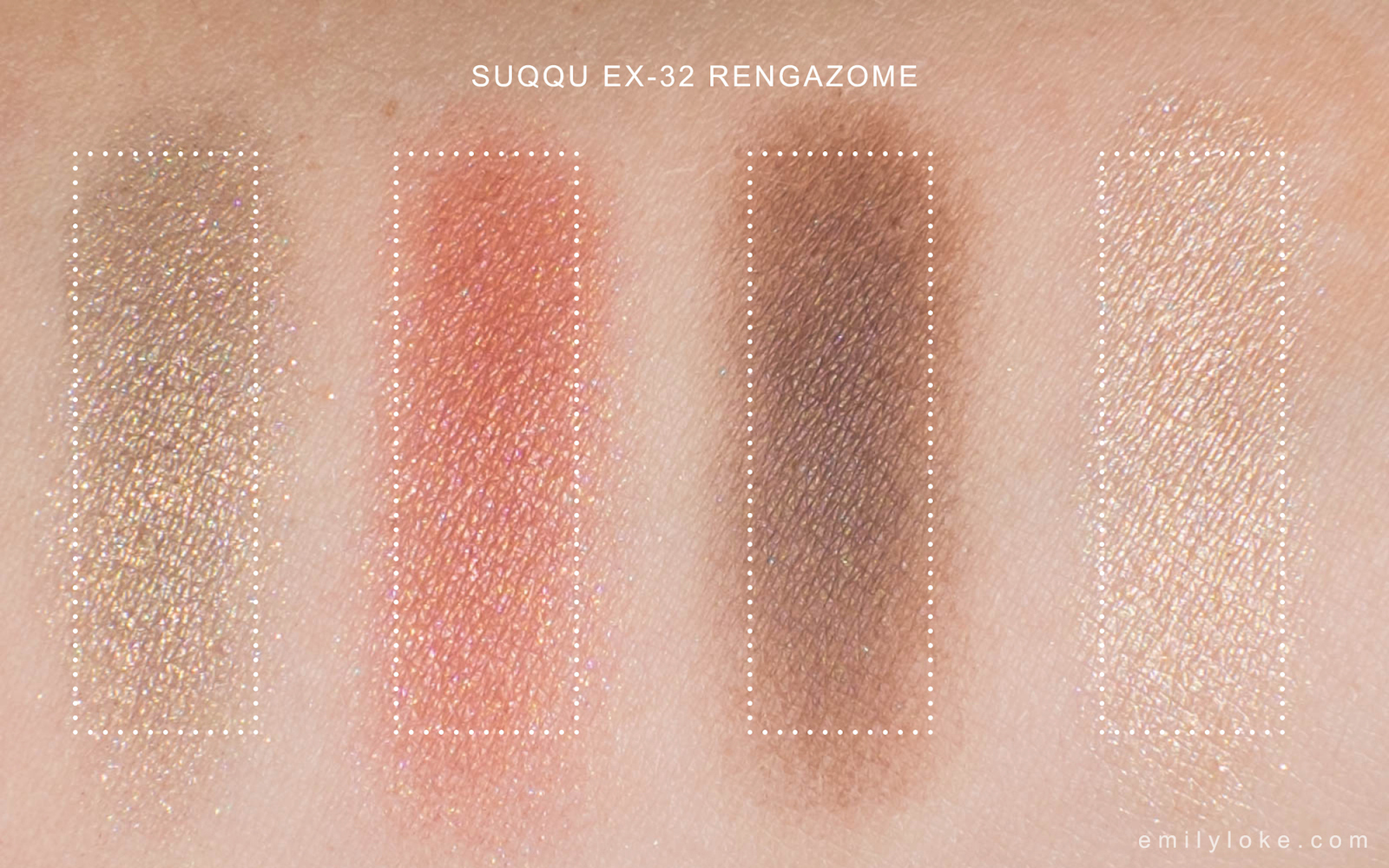 Actually, ALL the colours are extremely pigmented – much more so than the sheer, chiffon-like layers of SUQQU’s spring eyeshadows. I really enjoyed the boldness of SUQQU’s UK-exclusive summer collection, so I’m pleased to see that carry forward to this fall quad.

I’ll be posting a FOTD with this next, but in the meantime do let me know if you have any questions.

Pricing and Availability: EX-32 Rengazome is priced at £45 and launches tomorrow (August 11th) at Selfridges, and later this month (August 25th) at Fenwicks of Bond St and Harrods. As the “EX” part of its name suggests, this is a limited edition quad so I suggest emailing suqquuk@eqpuk.com to purchase yours as it seems they’ve already sold out on Selfridge’s website.