I really love my NARS Dual-Intensity Blushes. They’re pigmented and have this beautiful sheen and…I dunno, but something about that embossed stripe pattern makes them extra appealing to me. For the record, I feel the same way about the Dual-Intensity eyeshadows too, so I may be crazy but at least I’m consistent.

Anywho. Although NARS has previously released several cheek palettes, this Dual-Intensity Blush Palette is – you guessed it – the first one with Dual-Intensity Blushes. It comes in a cool mirrored case that is eye-catching to say the least. Even Adam felt compelled to pick it up – and he got a chuckle from how the palette’s mirrored facade said NARSissist on it. Well played, NARS. Well played. 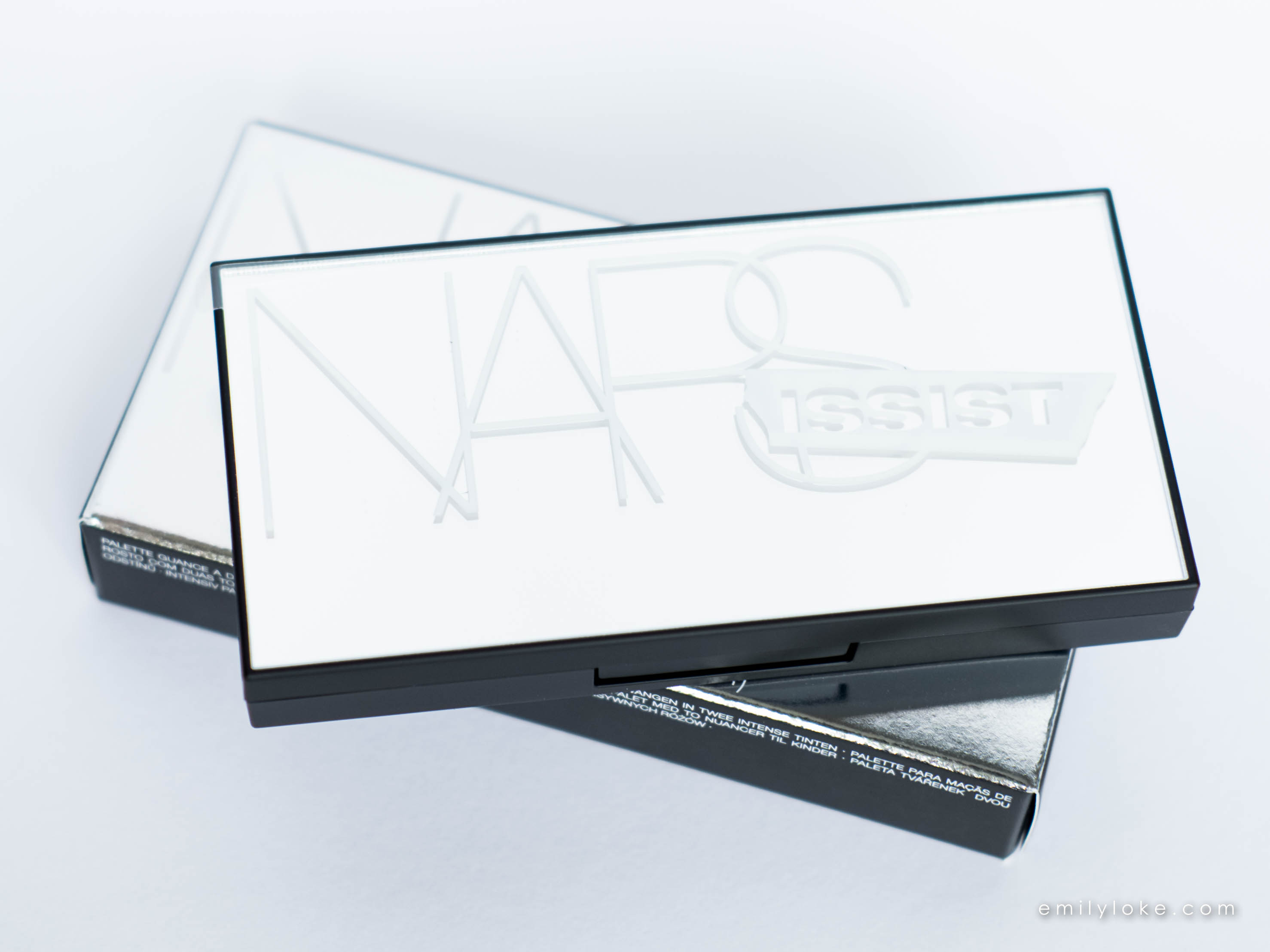 Inside, you get four shades which NARS refers to as a highlighter, two contouring shades and a blush. On my skin, it seemed more like a highlighter, two blushes and a contour shade. However you slice it, this palette has all your bases covered.

The colours are numbered I, II, III and IV rather than named, but are per the press kit are described as (L-R) Soft Tulle, Damask with Gold Sheen, Peony and Titian. 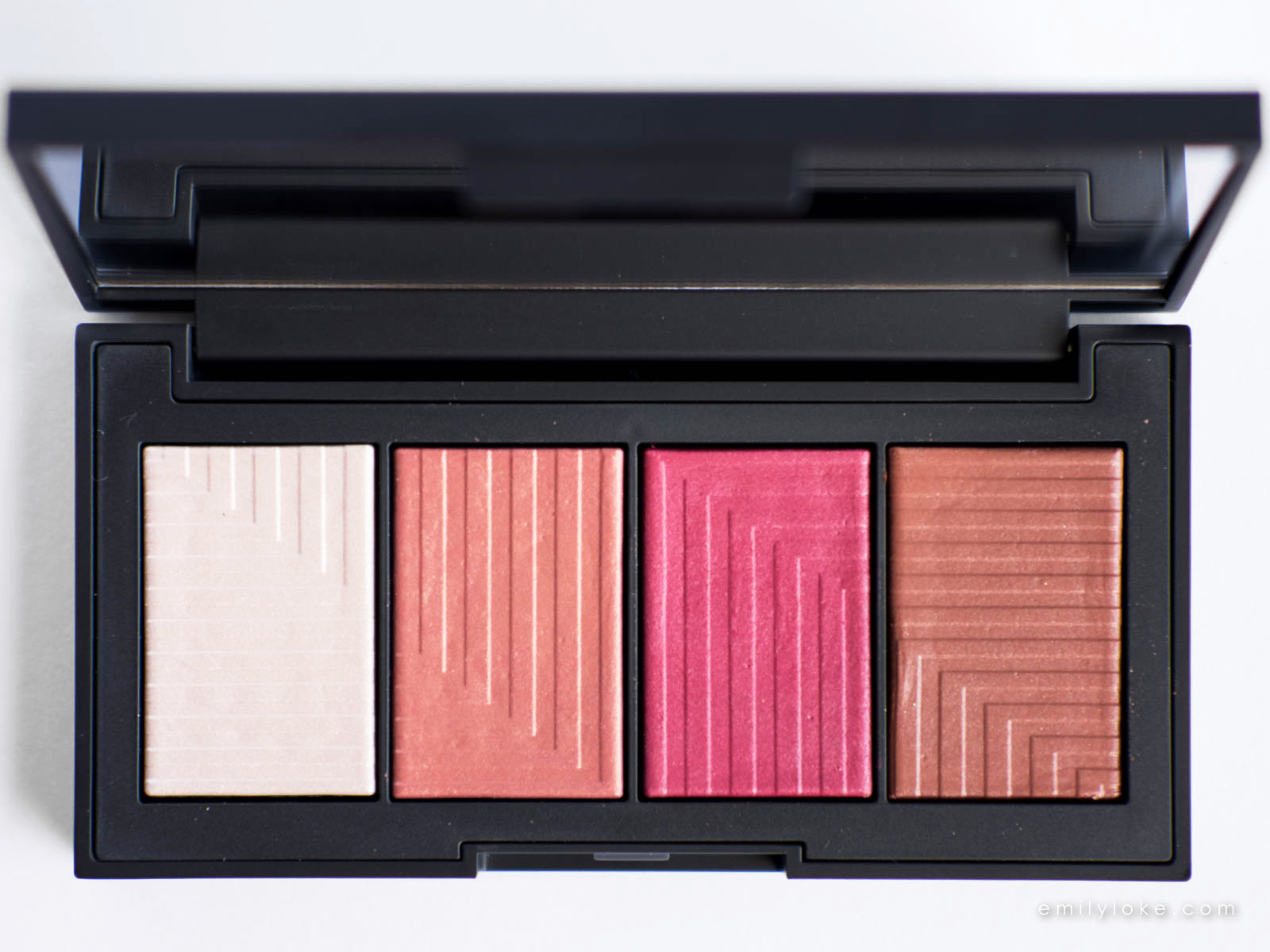 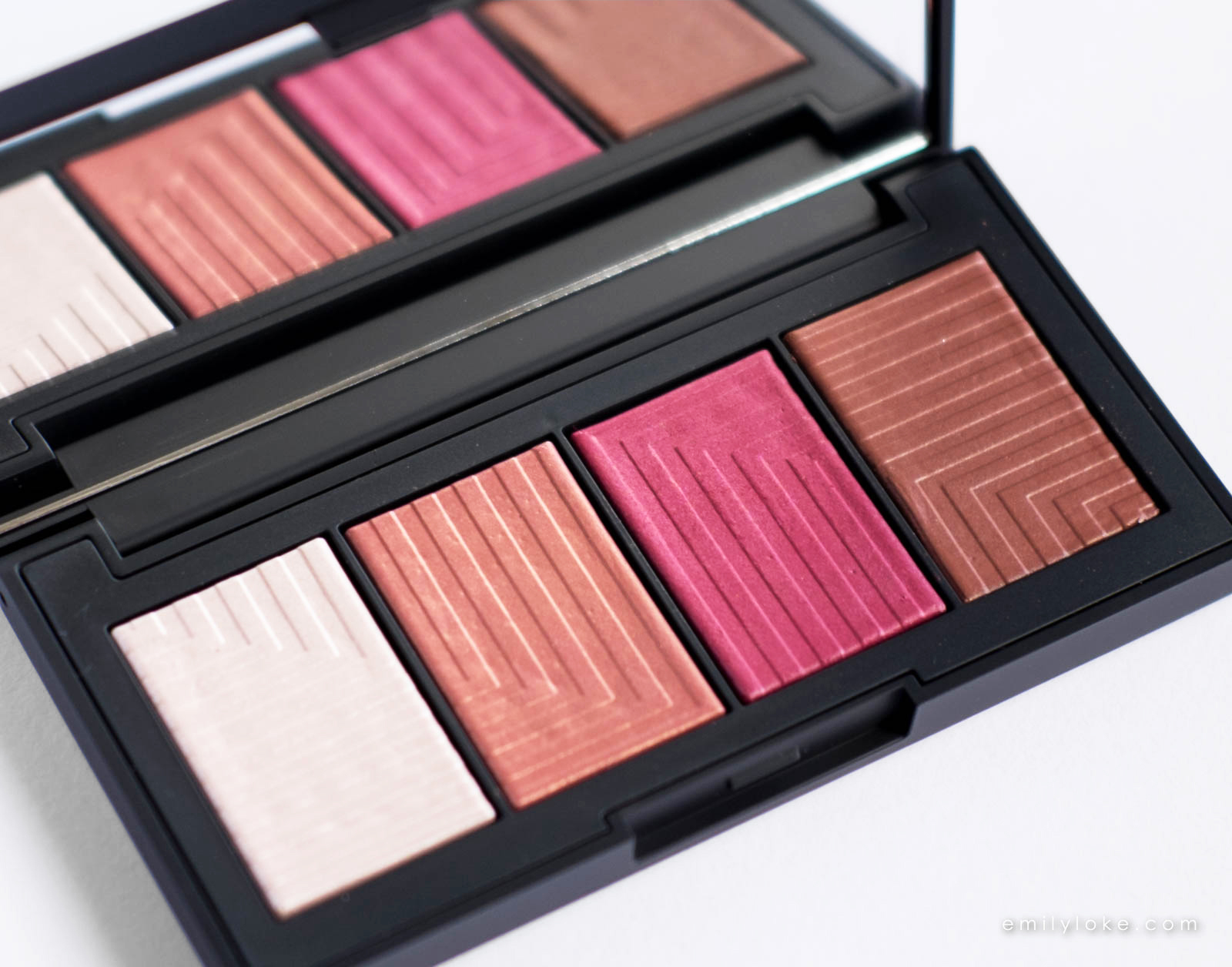 To be honest, I had a hard time photographing these blushes to show off their beautiful lustre. I still don’t think the above pictures do this pretty palette justice, but hopefully you’ll get a better idea from these swatches. As always, the colours were pigmented and I felt the shade selection was well conceived to work on both warm and cool complexions, and across a wide range of skin tones.

I personally enjoyed mixing shades II and III to tailor the tone of my blush to suit the rest of my makeup, starting out with III all over and adding II on top to warm it up slightly. 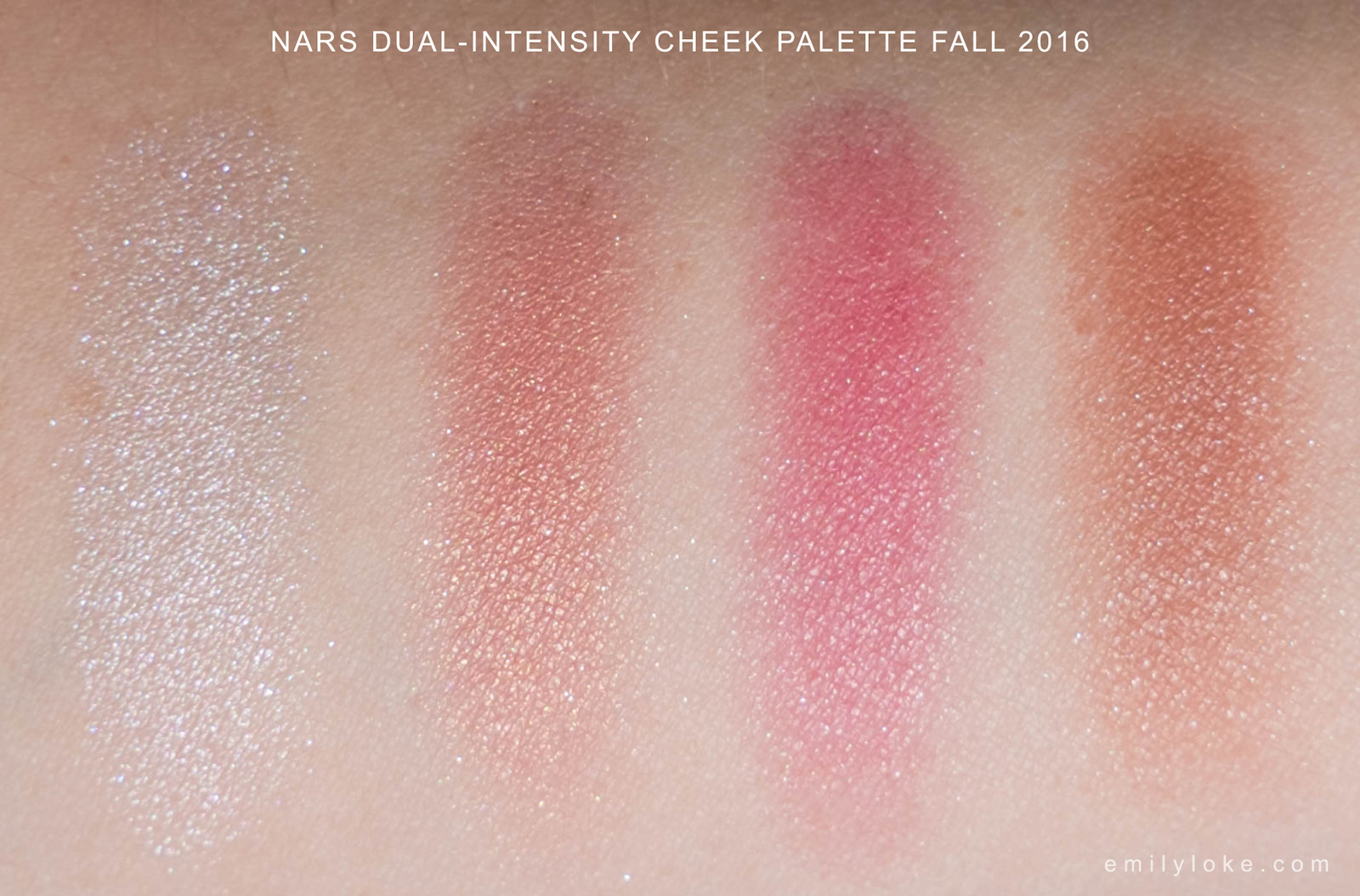 Of course, I am most obsessed with that highlighter shade. I’m an absolute sucker for true iridescent white highlighters and SO. FEW. BRANDS. make ones that aren’t either flat frosty whites or way too pink. For science, I swatched the lightest and darkest shades of this palette against NARS Dual Intensity Blush in Craving and my other favourite highlight/contour compact, Make Up For Ever Pro Sculpting Duo in 01 Pink Beige.

Since receiving this, I’ve become completely hooked. I love the convenience of all-in-one cheek palettes, whether I’m in a rush or not – it’s an underrated lifehack to have your blush, contour and highlighter all in one place. This palette gets bonus points for that gorgeous highlighter though, and the fact that I can tailor the tone of my blush because all the colours layer so well. Let’s just say it’s a good thing these pre-use photos turned out, because I’ve already scuffed the embossed stripes so much they’re flat in some areas.

One last thing I should mention is that this palette holds up in terms of product value. I actually heard someone complaining that the pans were small. Uh, no. BECCA Afterglow palette pans are small. These ones are only about 20% smaller than regular size.

Pricing and Availibity: NARS Dual-Intensity Cheek Palette is priced at SGD$90 and available at NARS counters from August 2016. 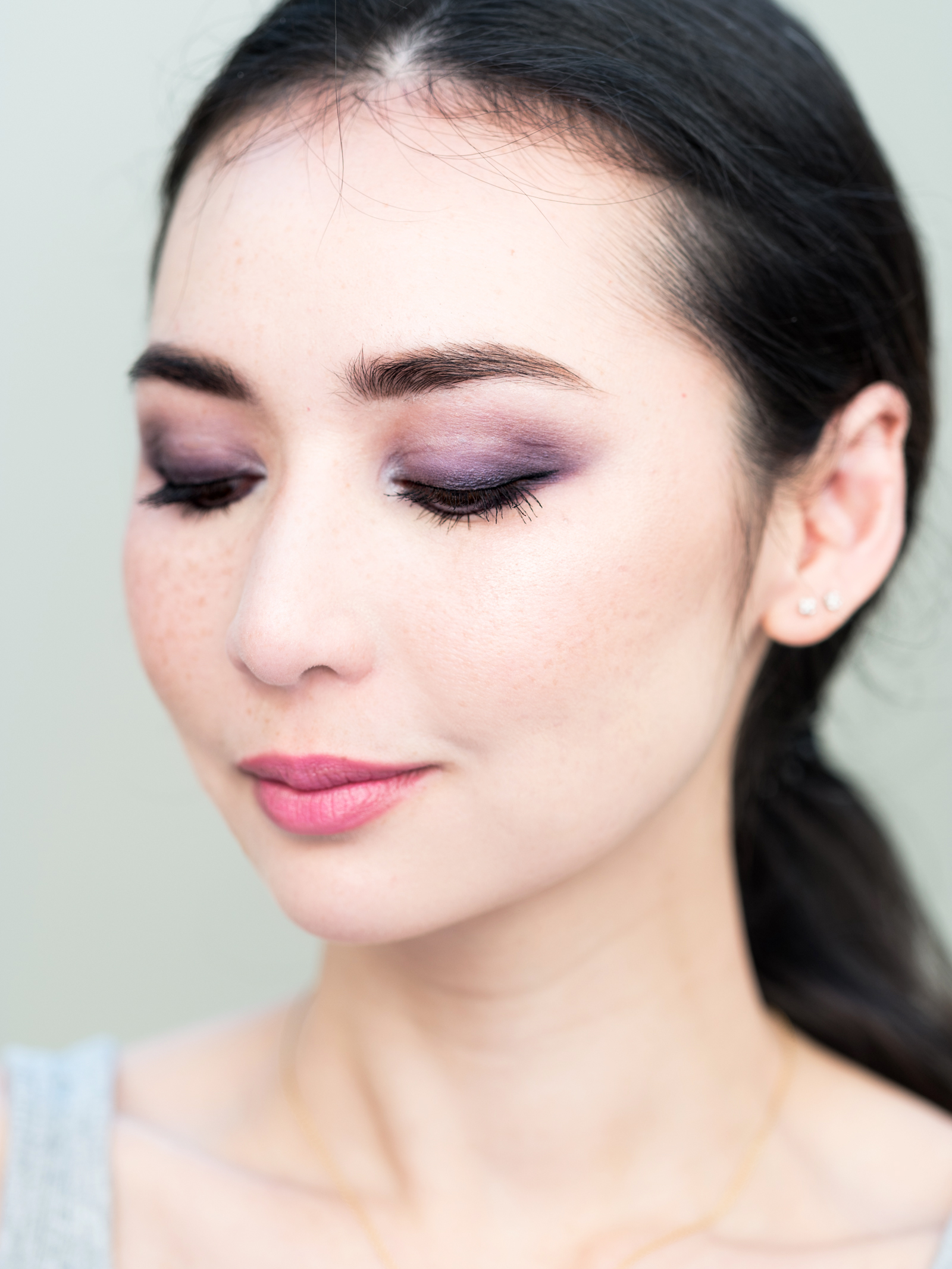