MAC has some really neat new releases for Spring 2017, one of which a brand new range of base products called Next To Nothing. The line is made up of a liquid Face Colour and a Pressed Powder, both of which are available in nine different shades rather than specific colours. For example, these are both in “Light” rather than my prescribed MAC colour (NC15).

As you’ve probably gathered from the name, MAC’s Next To Nothing range takes a less-is-more approach to base and is designed to be as light as possible. Next To Nothing Face Colour is less of a foundation and more of a barely-tinted moisturizer that imparts a dewy, hydrated finish with a subtle wash of colour. The Pressed Powder is sort of a hybrid between a setting and a finishing powder. It offers decent oil control and has a mostly matte finish with an extremely light, barely noticeable sheen that adds a subtle radiance. 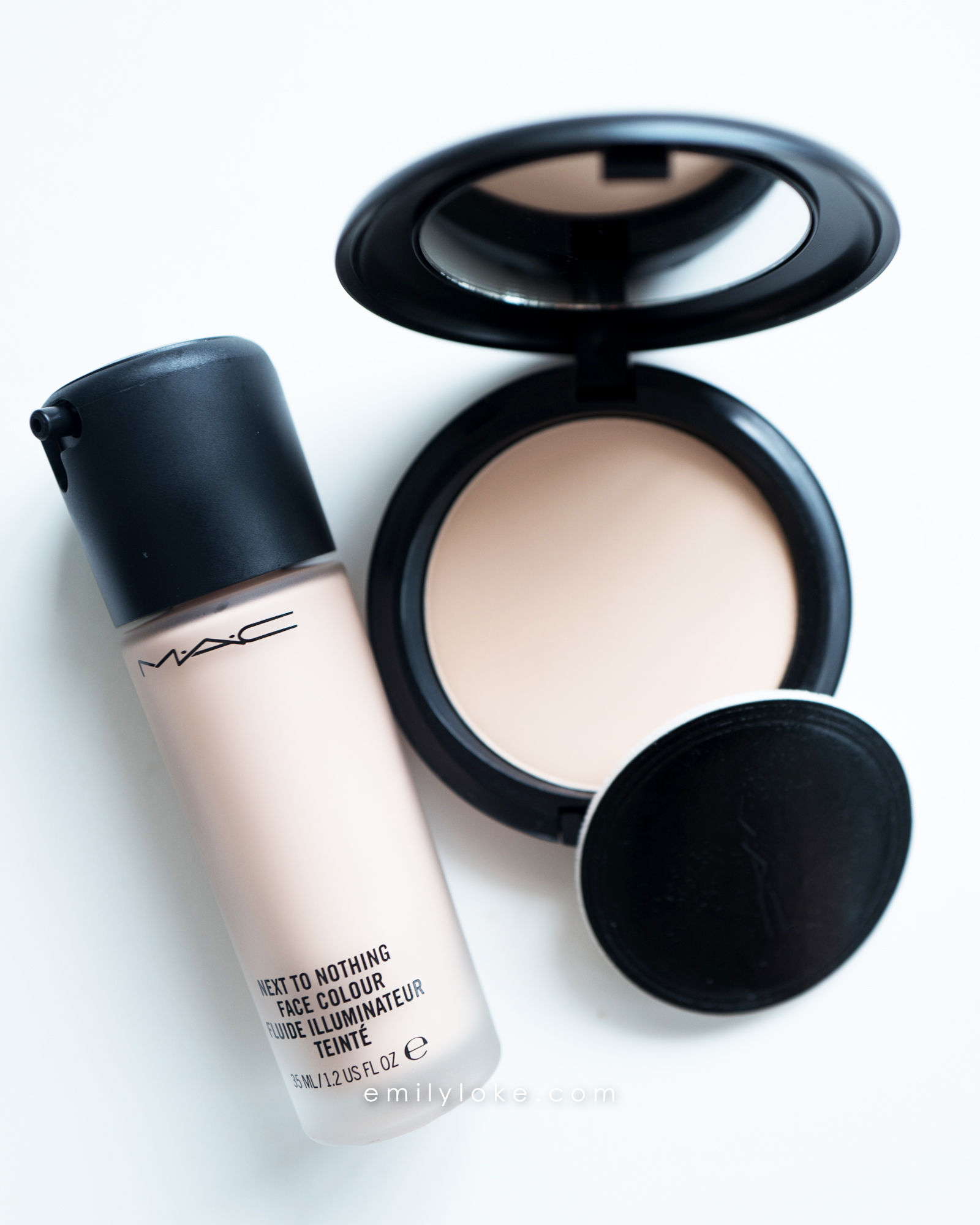 Coverage is light and I wasn’t able to build it up very much, so I did need to use a concealer…though surprisingly, no more of it than I’d normally use with a medium coverage foundation. I noticed that it also did a good job in priming my skin for concealer in the areas that needed it – the concealer seemed to melt into my skin much more seamlessly with this underneath as a base. 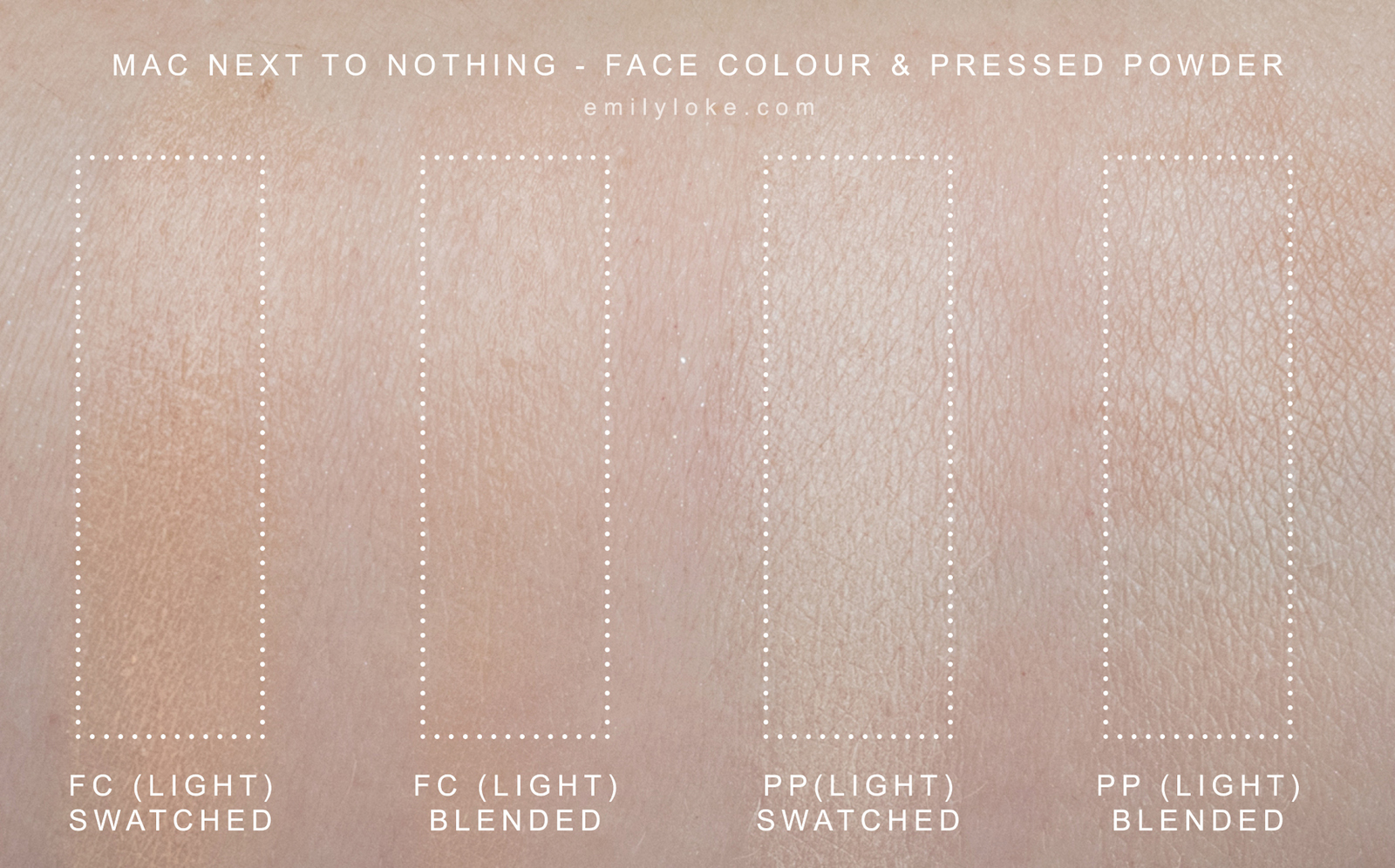 With some minor spot concealing, the effect was surprisingly polished albeit a bit too shiny for my liking, so I finished up by setting my face with the Next To Nothing Pressed Powder. A healthy dusting of the Pressed Powder took the shine down to a radiant glow, with no caking in sight. The powder itself has a light sheen to it, which contributes to the appearance of healthy skin and makes it (in my opinion at least) a must-have companion for the Next To Nothing Face Colour if you really want to play the “I woke up like this” card. And believe me, you really can with this stuff! I don’t think I’ve confidently worn such a light base in a very long time, and I like that my face remained perfectly luminous without actually getting shiny for about 8 hours sans touch ups.

Although my first impression was that the Next To Nothing range would ONLY suit people who had super flawless skin to begin with, I found it worked really well on my face too. I usually have a bit of redness on my cheeks and some red spots from hormonal breakouts (which is what I needed the concealer for).

Next, here’s a quick look at two of MAC’s limited edition Times Nine palettes for Spring: Solar Glow and Red Hot. The former is a cool-toned palette with a focus on shimmer/glitter shades – 2/3 of of this palette is sparkly, so if you love glitter this is going to be right up your alley. It also contains Quarry (the centre shade) which is a bit of a cult favourite for transition/crease work. I have been meaning to pick it up for ages now, so to get it in this palette with a bunch of beautifully sparkly eyeshadows was a very nice bonus. 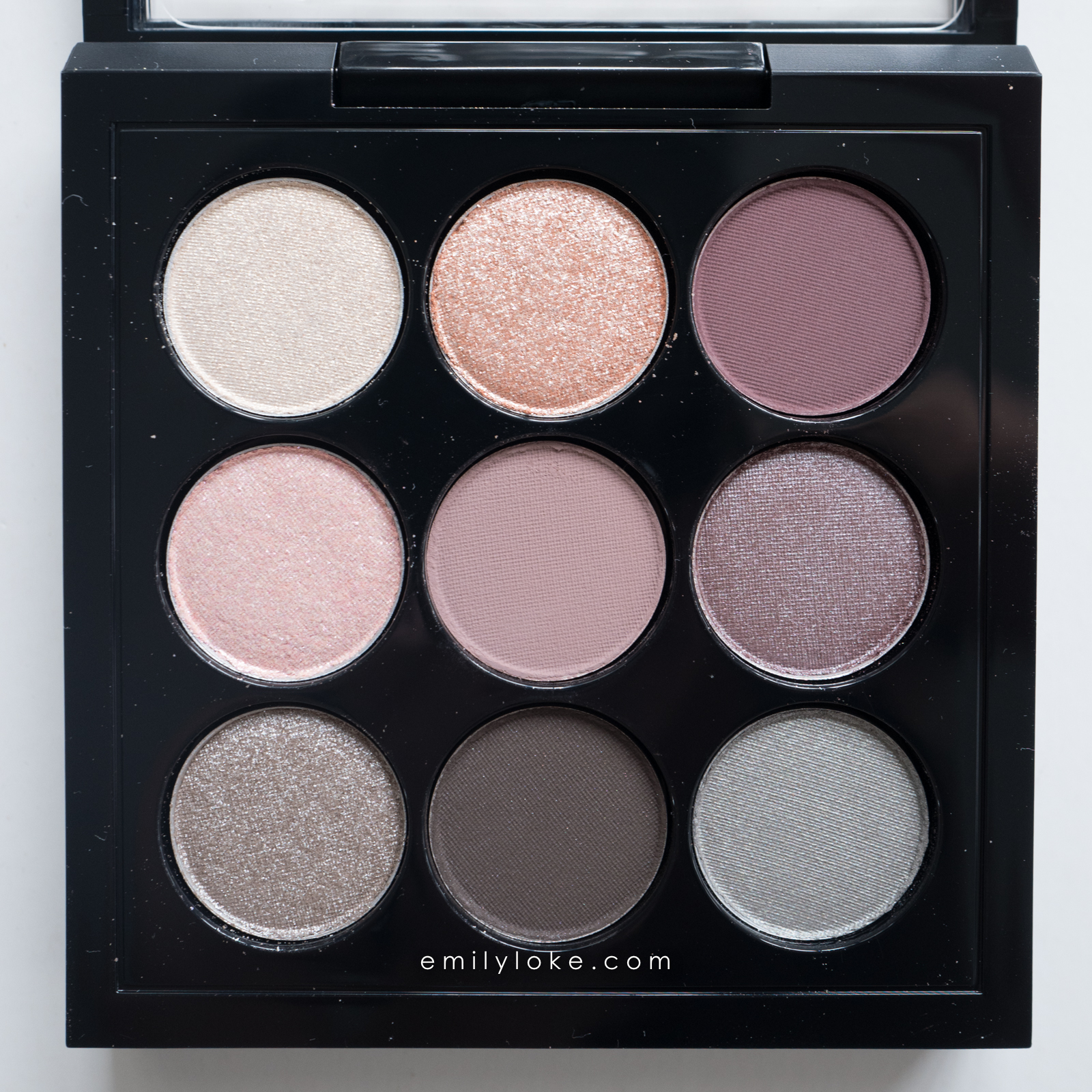 All the shadows in Solar Glow swatched well, even the chunkier meant-to-be-foiled-on shades like Copper Aura, Sugared, and Cosmic. The mattes were smooth and pigmented, with Quarry more than living up to its hype. I have a hard time picking a favourite colour from this palette but I love the 3 shades in the middle row best:

As for the Red Hot Times Nine, it had mostly matte and satin textures with only one colour being metallic – quite an interesting design decision that makes me wonder what the most ideal way of using this palette would be. I’m going to take this as a challenge and see what I come up with!

The focal point of Red Hot is undoubtedly its middle row of red, pink and fuchsia shadows that reminded me a lot of my beloved Modern Renaissance palette from Anastasia Beverly Hills. 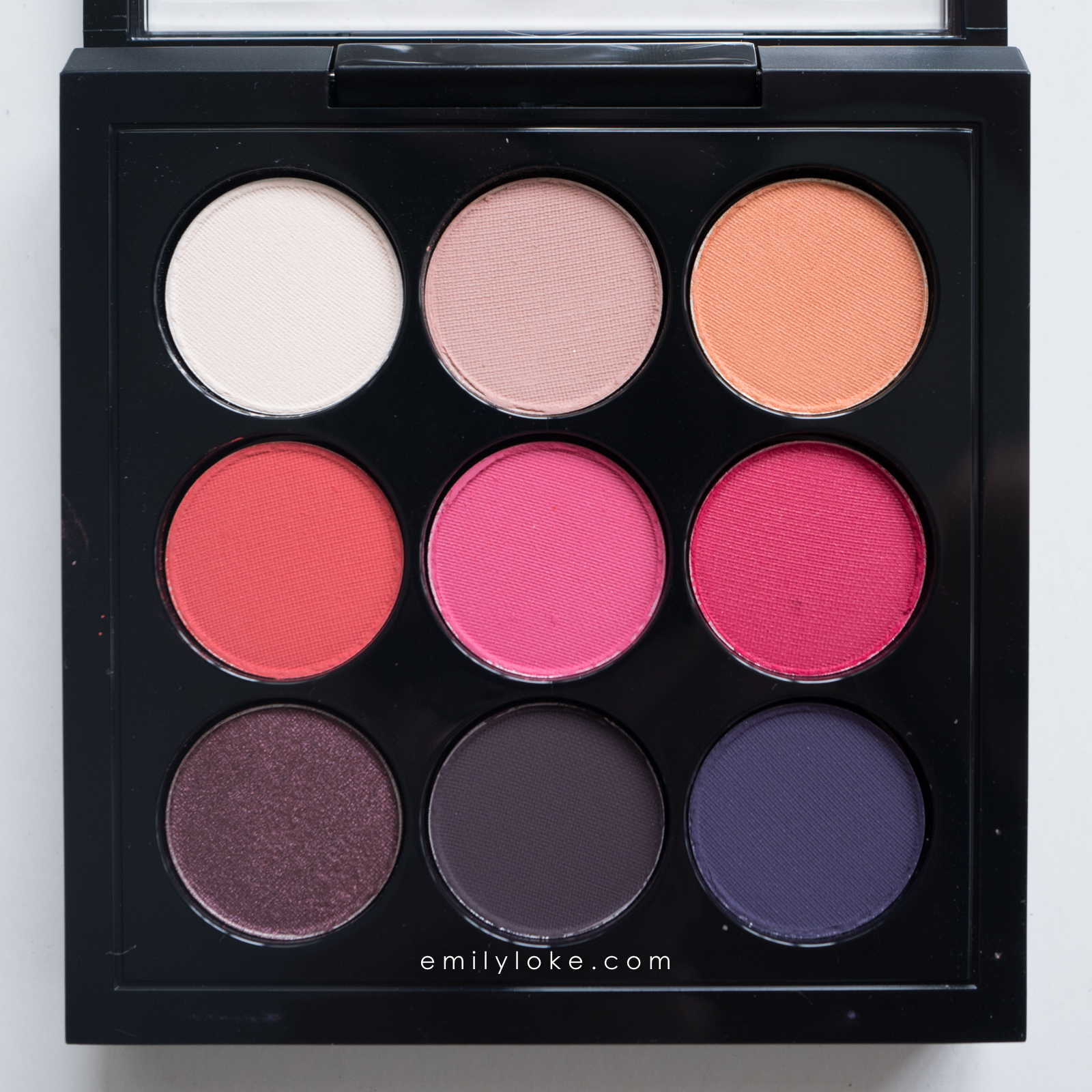 The shadows in this palette were a little less smooth than Solar Glow in swatches, though that’s not surprising since mattes (from any brand) do tend to be drier and stiffer than metallics. Most of the shades actually swatched quite well, considering; it was only Shadowy Lady that I had a bit of trouble getting an even swipe from. My 3 favourite colours from this palette are:

So far I’m impressed with the Next to Nothing Base products, but haven’t had a chance to properly play with either of the eyeshadow palettes yet…though I’m very much looking forward to doing that this week! 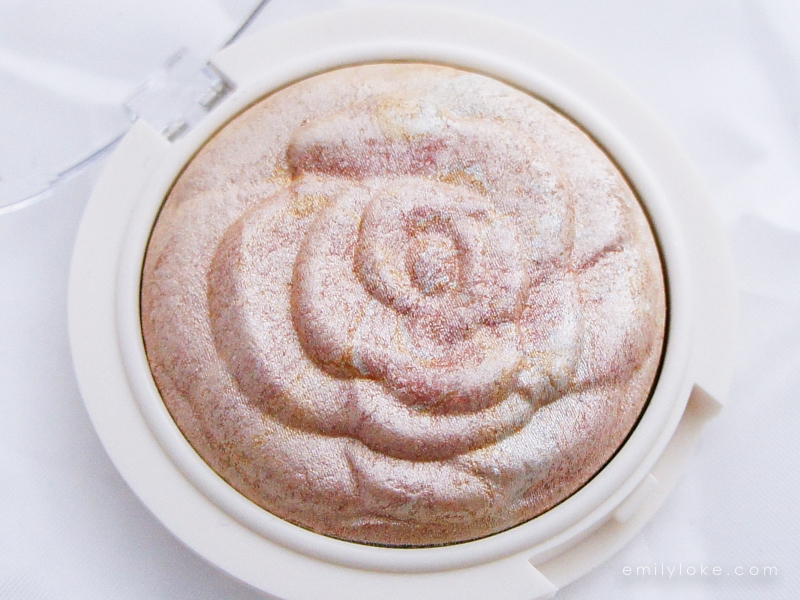 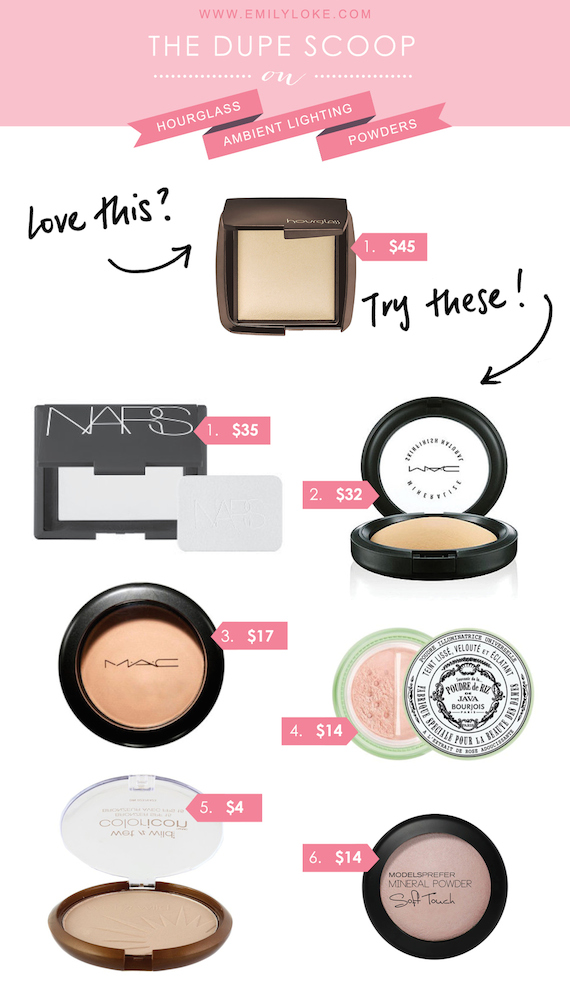